HISTORY OF CRICKET IN WELLINGTON 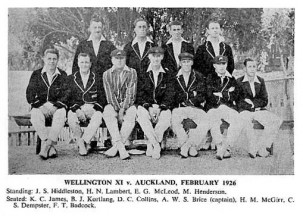 The Wellington cricket team in 1926 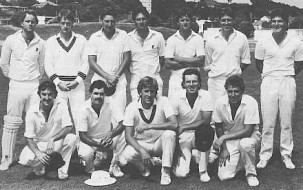 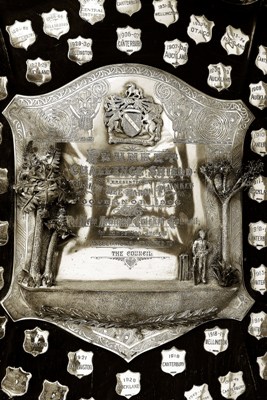 Cricket was one of the original sports seen in Wellington, a notice in the NZ Gazette on 16 May 1840 stating “that a game of cricket had been arranged between the gentlemen of Thorndon and members of the Pickwick Club.” Additionally, a cricket club was formed on 21 February 1841, and two teams from the Wellington Club are noted as having played a game at the Te Aro Flat on 28 December 1842.

The first representative match was played on the Parade Ground, near Mt Cook Barracks, on 16 March 1860, Auckland defeating Wellington by four wickets.

The first game at the Basin Reserve was played on 11 January 1868 between the Wellington Volunteers and the officers and men of HMS Falcon. This was followed by the formation of the Wellington Cricketers’ Association on 23 October 1875 so “that a Cricketing Association be formed for the purpose of providing a ground for the use of the clubs forming the Association, for the management of provincial and intercolonial matches, and the advancement of cricket generally.”

The Plunket Shield was awarded to Canterbury at the end of the 1906-07 season for having the best provincial record at the time and became the principal domestic cricket showpiece from then until the end of the 1974-75 season when replaced by the Shell Series, then State Championship, Shield and Twenty20 titles.  In 2009, at the end of the State sponsorship of Domestic Cricket, the Plunket Shield reverted to its original competition name and the HRV Cup (Twenty20) and Ford Trophy (One Day) were created.

Originally a challenge Shield, Wellington first won the Plunket Shield off Canterbury on 25, 26 and 27 December 1918, and subsequently won it 14 times in its competition format between 1923-4 – 1973-4. Since 1974/75, Wellington has won the Shell Trophy or State Championship six times, and the one-day Shell Cup or State Shield four times.

The 1883-84 season saw the introduction of the first club competition in both senior and junior grades, Star winning the inaugural senior club Championship over rivals Phoenix, Midland and Wellington. By 1909-10 there were eight clubs competing for the Senior club championship, which became the Cook Shield between 1925-1995, while Hutt Valley clubs contested the Wilford Kerr Shield between 1928-1997. The Pearce and Hazlett Cups were the prizes when the competition was again restructured from 1996-97.

​​​​​​​In the 2009/10 season Eastern Suburbs re-wrote the Wellington cricket record books when they won their ninth consecutive Senior Championship title, three more than the six in a row won by their forerunners Midland over a century ago.