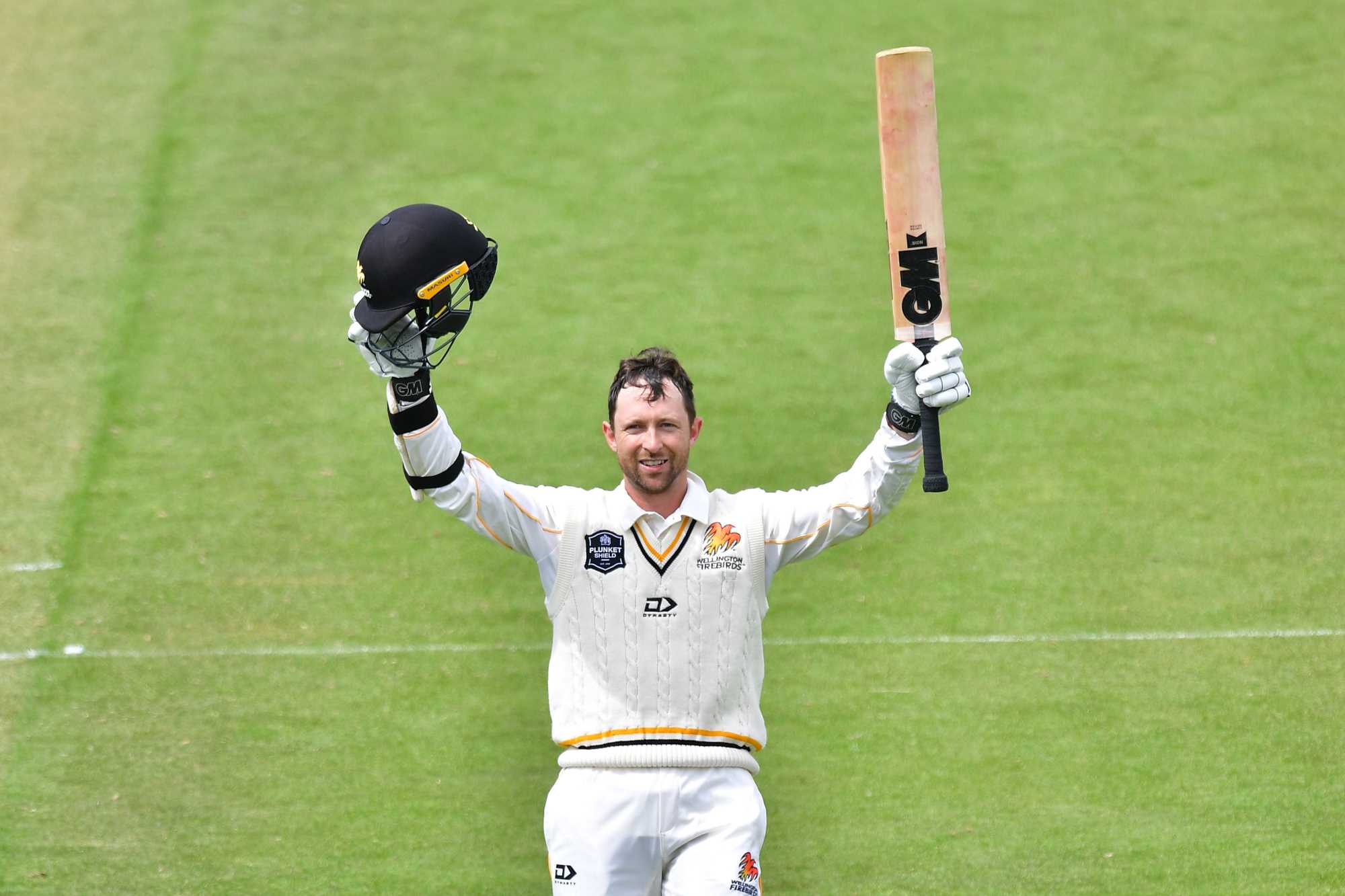 Firebirds' Devon Conway celebrates 300 runsduring day two of the Plunket Shield cricket match between the Wellington Firebirds and Canterbury at the Basin Reserve in Wellington on Wednesday the 30 October 2019. Copyright Photo by Marty Melville / www.Photosport.nz

In a break from tradition and a nod to the current Covid-19 ‘Stay At Home’ provisions, the 2020 ANZ New Zealand Cricket Awards were for the first time presented electronically last week and there was plenty of Wellington success to be celebrated.

The WHITE FERNS captain Devine spearheaded the Blaze’s run to their third straight T20 title with 365 runs and 12 wickets, topping the six-hitting table (25) and strike-rate charts (184.5) in both the men and women’s competitions.

“It was a fantastic effort from the team,” reflected Devine.

“We knew there was the pressure of expectation on us and to go through the season unbeaten was really satisfying.

“It was a pleasing season for me personally. I don’t set goals to hit the most sixes but that’s certainly my style of play and from a captaincy point of view I think it’s good to lead from the front and be aggressive.

“Any time you get to score a century is special and certainly to do it in a T20 was pretty cool.”

Devine said the current lockdown restrictions were limiting but that all the players were doing their best to prepare and train as well they could.

“Everyone’s health has to come first at the moment so as players it’s about keeping ourselves physically and mentally ready to go for whenever the moment may come when we can play again.”

The Blaze T20 title winning exploits were backed up on the same day at the Basin Reserve by their male counterparts the Firebirds, who downed the Auckland Aces by 22 runs to seal a capital city double.

As he had done all season, left-hand opening batsman Devon Conway led the way in the final, top-scoring for his side as he finished the competition with a commanding total of 543 runs at an average of 67, including a century against the Otago Volts.

“I really enjoyed batting up the order this year,” said Conway.

“T20 can be a bit hit and miss at times, but we managed to put together a really consistent campaign full of memories I’ll cherish.

“The final was such a special day. To see all the Wellington people who came out and braved the weather to be at the Basin Reserve to watch both the Blaze and the Firebirds claim victory was just awesome.”

Conway’s supreme domestic men’s award made it two honours in two days after the Wellington Firebirds star claimed the men’s Dream11 Super Smash Player of the Year award on Tuesday.

He said it was more than just the runs that made the season satisfying.

“It was a brilliant season for the Firebirds,” he said.

“We’ve got a great culture in the team and to claim two of the three trophies was a huge effort; especially winning the Plunket Shield after something like 16 years which was really special.

“I didn’t ever expect to win this award two years in a row so it’s certainly something I’ll cherish and it’s a pretty awesome feeling to be honest.

“I’ve got to say thank-you to the team management, support staff and my teammates – I couldn’t have achieved these awards without their help so I’m really grateful to them.”

Right-arm swing bowler Jess Kerr made the 2019-20 season her own with the ball earning her maiden ODI and T20 International call ups to the WHITE FERNS.

"It's very exciting," she said.

"It was great having all the WHITE FERNS available to play - I was playing alongside five very experienced players which was just awesome and then having Sophie Devine's leadership gave me confidence too which definitely helped the whole team."

It was the continuation of a blockbuster T20 summer for Devine who was the obvious choice for the award, scoring her maiden T20 century while also becoming the first player, male or female, to reach 50 in five, and then six, consecutive T20 Internationals.

“What can I say? Sophie had an exceptional season with the bat in T20 cricket,” Carter said.

Devine scored 429 runs at an average of 71 and at a strike-rate of 132 – employing a power game that rivals the best female players in the world.

“Our T20 side is at its best when Sophie is scoring runs at the top. She gives others around her the freedom to play their natural game,” Carter said.

“Sophie’s ability with the ball in T20 cricket goes under the radar at times. She will often step up and bowl the hard overs and uses changes of pace to her advantage.

“She is a top quality all-rounder and an exceptional T20 talent.”

Dave’s 33-year association with the Taita District Cricket Club has been instrumental in the increase in junior cricket. In 2003, a once strong junior cricket club had dropped to numbers so low that Saturday morning cricket became a distant memory. However, during the 2012-13 season Dave worked closely with the local Development Officer to rejuvenate both junior and youth cricket by providing free access to participant-centred cricket for all ages. All Dave’s hard work paid off with a dramatic increase in school students exposed to cricket. The club has recognised Dave with a lifetime membership.

Rick’s association with cricket in Wellington began in earnest in the early 2000s when he started coaching his sons at Johnsonville. Over the last 20 years Rick has fulfilled almost every volunteer role imaginable, from Club Captain to Senior Chair, from Selector to Manager and everything in-between. Irrespective of Rick’s many contributions, it could be argued that his greatest impact has been in the junior space.

At the beginning of the 2012-13 season, Rick began a seven-year stint as the Johnsonville Development Officer, as part of Cricket Wellington’s “One Club” Programme. Staunchly proud of the Johnsonville region and club, he set about ensuring primary-aged children had ample opportunity to experience cricket. Rick developed relationships with local primary schools and on average more than 1000 primary-aged children per season received access to cricket awareness and Superstar skills sessions. During Rick’s tenure, the junior club increased its numbers by nearly 33 percent. This tremendous growth was a by-product of increased in-school activity and enhanced community relationships.

In the 2015-16 season, Rick stepped into the role of Junior Convenor as there was no-one suitable to fill this role. Little did Rick know he would be the Junior Convenor for three seasons. This was in addition to his role as Club Captain, which he has held since 2007. Understanding the need for all junior participants to receive access to quality coaching, Rick and the junior committee made it mandatory that all coaches undertake training, police vetting and a first-aid course, two years prior to NZC and Major Associations following suit. This learned-centred approach highlighted Rick’s dedication to providing an outstanding experience for junior cricketers.

In addition to his work with the Johnsonville Cricket Club, Rick has served as the Coach, Manager and Selector for the Cricket Wellington Year 8 team since the 2017-18 season – a role he’s taken great pride in, seeing a number of the Year 8s he first took to Hawkes Bay during the mid-2000s, progress into the Wellington Under-17 team. His contribution to junior cricket in Wellington sees him frequently go above and beyond expectations and he is a constant advocate for athletes receiving better opportunities to experience the game we love. It’s a testament to Rick’s drive and desire that junior cricket in the Johnsonville region continues to grow and develop.

Rick is the type of person that every club and organisation needs. He is passionate about his beloved Johnsonville CC, where people call him the unofficial Mayor of Johnsonville, and he is tireless in his work to ensure every team in his club is treated fairly and equally.