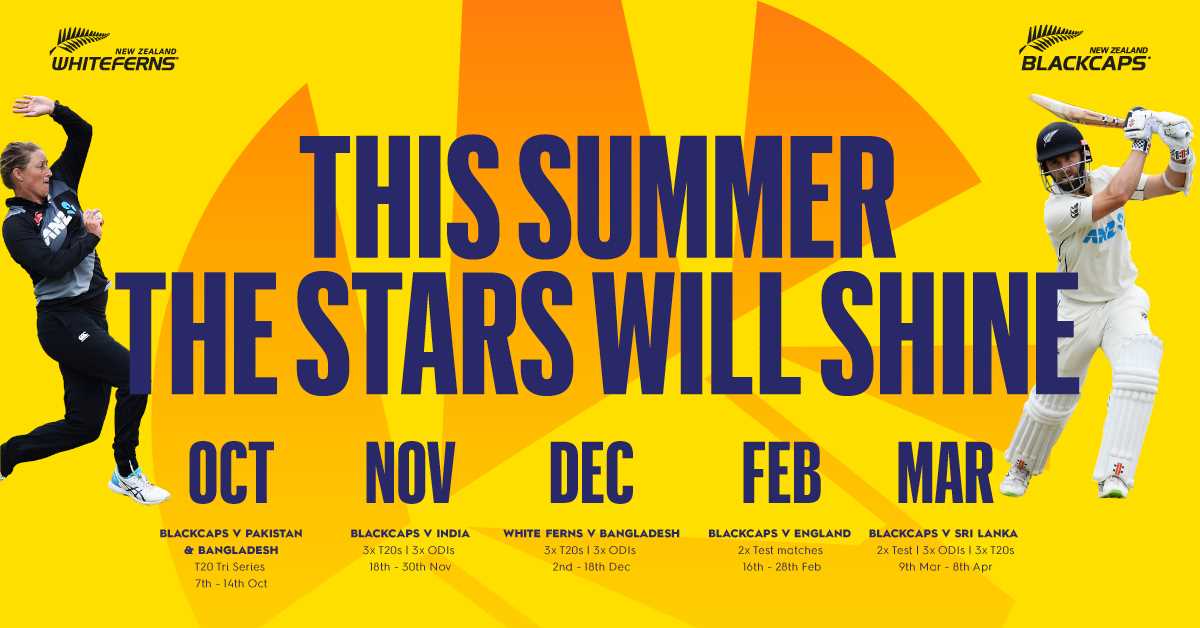 Two Test matches - against England and Sri Lanka - and white ball cricket for the WHITE FERNS and the BLACKCAPS highlight a jam-packed international cricket schedule in Wellington this summer.

In a 2022-23 season that will see the WHITE FERNS and the BLACKCAPS head offshore for their respective ICC T20 World Cups, Wellington cricket fans can look forward to a massive summer, including two Test matches at the Cello Basin Reserve, plus a BLACKCAPS T20 against India at Sky Stadium and a WHITE FERNS ODI against Bangladesh at the Basin.

England and the Barmy Army return for Test cricket at the Cello Basin Reserve for the first time since 2013 when Nick Compton and Jonathan Trott centuries highlighted a hotly contested draw.

A Test match against Dimuth Karunaratne and Sri Lanka follows - the Basin hosting a double Test summer for the first time since 2017 when West Indies and South Africa visited.

The WHITE FERNS, having attended the Commonwealth Games and returned from their tour of the West Indies, will host Bangladesh in T20 and ODI series before departing in January for South Africa, where they will contest the ICC Women’s T20 World Cup.

Playing at home for the first time under new coach Ben Sawyer, the WHITE FERNS will play three T20s, at Christchurch, Dunedin and Queenstown, before decamping to the North Island for three ODIs, the first at the Basin, before continuing on to Napier and Hamilton.

The home season will start in early October, when the BLACKCAPS will put the finishing touches on their preparations for the ICC Men’s T20 World Cup in Australia with a Christchurch-based tri-series, featuring Pakistan and Bangladesh.

India will arrive in New Zealand at the conclusion of the world cup to play the BLACKCAPS in three T20s at Wellington, Tauranga and Napier, and three ODIs at Auckland, Hamilton and Christchurch.

Both series are likely to be hard-fought. India is currently the No.1-ranked T20 side in the world while the BLACKCAPS are the No.1-ranked ODI side. The BLACKCAPS will then depart for the sub-continent for a tour of Pakistan and a short[1]form series in India, before returning in early February to prepare for the two Tests against England – at Tauranga (D/N) and Wellington.

Sri Lanka’s arrival in New Zealand at the end of February will see the five-day format continue, with Tests scheduled for Christchurch and Wellington ahead of a three-match T20, and three-match ODI series.

NZC chief executive David White said the upcoming season held great promise for both the WHITE FERNS and the BLACKCAPS.

“Last summer’s ICC Women’s World Cup did so much to promote the game, and it will be great to see the WHITE FERNS in action right around the country.

“And to have India, England and Sri Lanka touring here, on top of visits from Pakistan and Bangladesh, means cricket fans can look forward to a summer of top-quality cricket.”

They would go on sale to the general public this morning.

“We recognise the challenges of the current environment – and our priority is to make international cricket as accessible as possible.

“After the previous seasons’ restrictions from Covid, we want to ensure our venues and fixtures remain affordable and welcoming.”