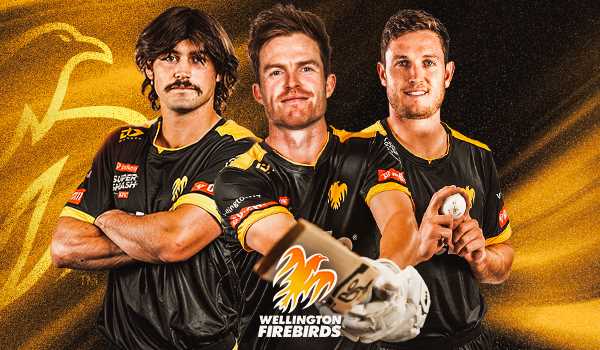 The Wellington Firebirds have added the pace of BLACKCAPS speedster Adam Milne and the power of batsman Nick Kelly to their contract list for the 2022/23 season.

Milne joins Wellington after 13 years with the Central Stags where he established himself as one of the world’s deadliest fast bowlers.

A 30 T20, 40 ODI international, Milne has experience at the highest level around the globe since debuting for New Zealand at the age of 18.

He was part of the BLACKCAPS campaign that reached the World Cup final in 2015 and the T20 World Cup final last year, and has appeared in the Vitality Blast for Kent, the Big Bash for the Sydney Thunder, The Hundred for the Birmingham Phoenix, and most recently the Chennai Super Kings in the Indian Premier League.

Milne broke back into the BLACKCAPS setup last summer after strong showings in BBL10 for the Thunder and in The Hundred for the Phoenix where he was the standout fast bowler in the competition with 12 wickets.

Kelly makes the move North after three seasons with the Otago Volts where he showed his promise as one of the most free-flowing top-order run scorers on the domestic scene.

The left-hander boasts a first-class batting average of a tick over 35 and has three List A centuries and two first-class centuries to his name, including an unbeaten 234 for the Volts against Central Districts at University of Otago Oval last summer.

Cricket Wellington Director of Cricket Bruce Edgar said the duo would bring a lot of experience and excitement to the Firebirds side.

“In Adam Milne we have one of the most destructive fast bowlers in the world,” he said.

“He brings a huge amount of experience to our bowling group, having played in competitions and conditions all around the world, and that will be useful for our other bowlers, to learn from Adam.

“He’s shown over his career so far what an asset he is to any bowling attack, and we’ll be looking to leverage all that experience and expertise to help take this team to another level.

“Nick has shown he has all the capabilities of being a top-class top-order batsman and we know he has ambitions to get to the next level that we want to support him with.

“His first-class double century last summer just showed the talent he possesses, and he will play a vital power role in our top order.

Young top-order batsman Tim Robinson has also been rewarded for his strong performances for the Firebirds with his first official contract.

The 19-year-old turned heads in last season’s Dream11 Super Smash, featuring in eight of the Firebirds eleven games and scoring his maiden T20 half-century against the Otago Volts in Queenstown.

The Wellington College old boy capped off a breakout summer for Wellington scoring his maiden first-class century against the Auckland Aces in just his second Plunket Shield outing.

Edgar said Robinson is a promising player that the Firebirds have big hopes for in the future.

“Tim is another guy that has benefited from coming through the Cricket Wellington pathway and showed last year that he is ready to make the step up to the domestic level,” he said.

“He’s a strong batsman that can bat anywhere in that top order and adds a lot of depth to our batting stocks in all three formats.

“Tim has shown maturity beyond his years since being involved in the Firebirds setup and we know that with good support from our high-performance coaching team that he can go on to be an important part of this squad for years to come.

“This is a new era for the Firebirds with a largely new coaching staff and senior players retiring or making the step up to international level, so it’s a really exciting time for everyone at the Cello Basin Reserve.”

The remainder of the Firebirds contract list is largely the same as last summer including seven players who have come through the Cricket Wellington pathway system.

Finn Allen returns for his third season with the Firebirds, alongside fellow BLACKCAPS Rachin Ravindra and Ben Sears who add international experience to the 15-strong list.

Troy Johnson and Jakob Bhula bring depth to the batting stocks, as do allrounders Nathan Smith and Luke Georgeson.

Michael Snedden and the experienced trio of Logan Van Beek, Ollie Newton and Iain McPeake join Milne, Smith, and Sears in a strong pace bowling group, while leg spinner Peter Younghusband will look to build on his strong 2021/22 summer.

Of the players contracted in the previous season, allrounder Jamie Gibson has not been offered a new contract, allrounder Michael Bracewell has been promoted to a central BLACKCAPS contract, and Hamish Bennett has retired.

Jimmy Neesham has opted not to take-up a domestic contract with Wellington.

The sixteenth contracted Firebird will be named in the second round of selections on June 30.