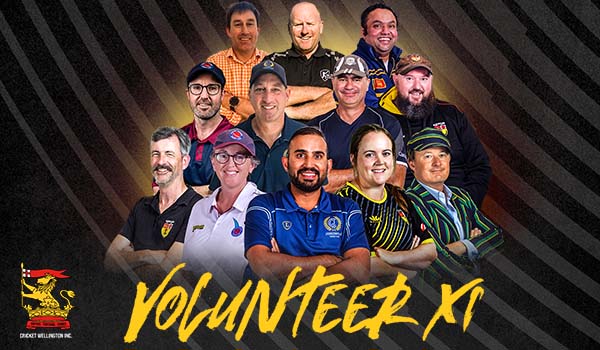 The Wellington cricket community’s most dedicated volunteers have been recognised for their commitment to the game in Cricket Wellington’s 2021/22 ‘Volunteer XI’.

The initiative, introduced by the Cricket Wellington community team last year, celebrates the best and most committed volunteers who have dedicated their time to help make cricket happen this summer.

Brian oversees the coordination of over thirty junior teams and 300 players at the club, and supports and manages over thirty coaches on a weekly basis who manage all these teams.

Brian has also run a series of Sunday club days offering opportunities to eager cricketers driven by the Spirit of Cricket and friendship which also involves post-game meals, speeches, photos, and team presentations.

Jeremy has been instrumental in his support of the Wanderers Cricket Club, initiating new opportunities and pathways for youth players from schools that have lower resource to develop talent.

He has also picked up some of the administrative duties at Eastern Suburbs, after the sudden illness to long time East’s stalwart Gordon Dry.

Jeremy has also been instrumental in transforming the East’s social media platforms and they now lead the way in the digital space, sharing stories from across the club that celebrate the successes of their current and past players.

Olivia is a fountain of knowledge about all things related to girls’ cricket and is always happy to have a chat and offer guidance, support and encouragement to other Girls Convenors and the parents of players.

Olivia works hard to promote and encourage linkages between all levels of the girls’ game internally through her club and does it all on top of being a proud mum and supporting her own kōtiro through their sporting journey.

Willie has shown considerable organisation to continue the Collegian’s proud reputation of having one of the best junior setups in Wellington. He has worked hard to maintain the size of junior teams against varied interest from kids. He also manages Sunday teams and organised a successful trip to the Hawkes Bay club competition where Collegians were the only club to have two teams in the 7A grade.

Willie always puts his hand up to umpire matches when required and has now taken on the President’s role at the Wanderers – his inspiration and drive giving the club a new lease of life to provide cricketing opportunities for college students, school leavers & kindred players.

Des volunteers his time to help coach the Wellington Collegians Premier Women, the Women’s Reserves team and the Premier Girls’. Des spends Monday evenings and Saturdays and Sundays coaching the women and girls and has recently taken on coaching one of the Collegians Under 13 teams too. Des has also taken on managing the Collegians Women’s Instagram page, keeping the wider Wellington community informed about what’s going on in the women’s space at the club.

Gretchen has been a core part of the Wellington Collegians Premier Women’s team since 2019. She achieved her career best bowling figures of 6-34 against North City earlier this season.

Off the field, Gretchen is a member of the Wellington Collegians board, where she serves as an advocate for women and girls. As part of this role, she was a key driver of the club’s website redesign which included a dedicated women and girls’ section to highlight the playing pathway.

Gretchen is also on the club’s social committee to encourage women’s players to get involved in club social events. She also organised a friendly match between the Premier Women’s team and the Men’s Division One T20 team as part of building the club’s culture.

Gretchen also donates her graphic design skills to the club’s social media presence and will often attend matches to capture photos. She also manages the club’s coaching investment fund which allows more quality and structure within our training programme as part of our women and girls’ pathway.

Gretchen initiated an inaugural women's preseason tournament in Hawkes Bay, which got over 50 female players involved in cricket ahead of the season starting. She also coaches the St Mary’s College girls’ team as an NZC level one coach and has been a member of the CW Women & Girls working group since 2001.

Damien works tirelessly across the North City Division 2 side, the Porirua Premier Girls’, and Kapiti Girls’ College. His wide range of commitments means he is coaching cricket almost every night of the week and even volunteers to help the Kapiti Girls’ College 1st XI. Damien has created a culture based on the girls being given the opportunity to develop and enjoy themselves.

Paul has played a critical part in the development of young players at the Hutt Cricket Academy. He has worked tirelessly to provide additional playing opportunities on Sundays and has devoted countless hours into arranging teams and games.

He goes out of his way to ensure all players are provided equal opportunities to develop their cricketing skills and have fun at the same time, and he continues to receive amazing feedback from players and parents.

Shanaka was appointed as Club Captain of Sri Lankan Sports Club for his enthusiasm for the game and his loyalty towards the club. He is always active on Saturdays, travelling back and forth across Wellington, watching as many of the four teams’ matches as possible and providing support when issues arise.

Mark has provided seven years of service to the Karori Club Committee, including four years as the Chair. He oversees the management of the junior club with over 200 players and 20 coaches.

Hermant has been involved with Johnsonville for three seasons and has contributed to the growth of female playing numbers at the club. This season has seen the numbers in this grade swell to 21 and Hemant’s contribution has been immense in helping girls continue playing the game after leaving school.

Michael’s commitment to Johnsonville’s Gold team has been excellent. He has been instrumental along with his daughters in keeping girls involved in cricket after leaving Raroa Intermediate School and his contribution and organisational skills have been immense.

“We say it time and time again, but cricket and sport in general just doesn’t happen without dedicated volunteers like the ones selected in our Volunteer XI,” he said.

“The early starts, the late finishes, pick-ups, drop-offs, scoring, umpiring and just generally being there for their people are all part of what makes our volunteers so valued.

“I’d like to take this opportunity to thank not only those volunteers selected in the XI, but every volunteer out there in our cricket community that has helped make things happen this summer.

“It’s been another challenging season, and we’re all proud to be part of a cricket community that has such a committed band of volunteers driving us forward.”

The wider cricketing community will be invited to vote on who is named the captain of the Volunteer XI through the Cricket Wellington Facebook page next week.