Blazing away at the Basin! 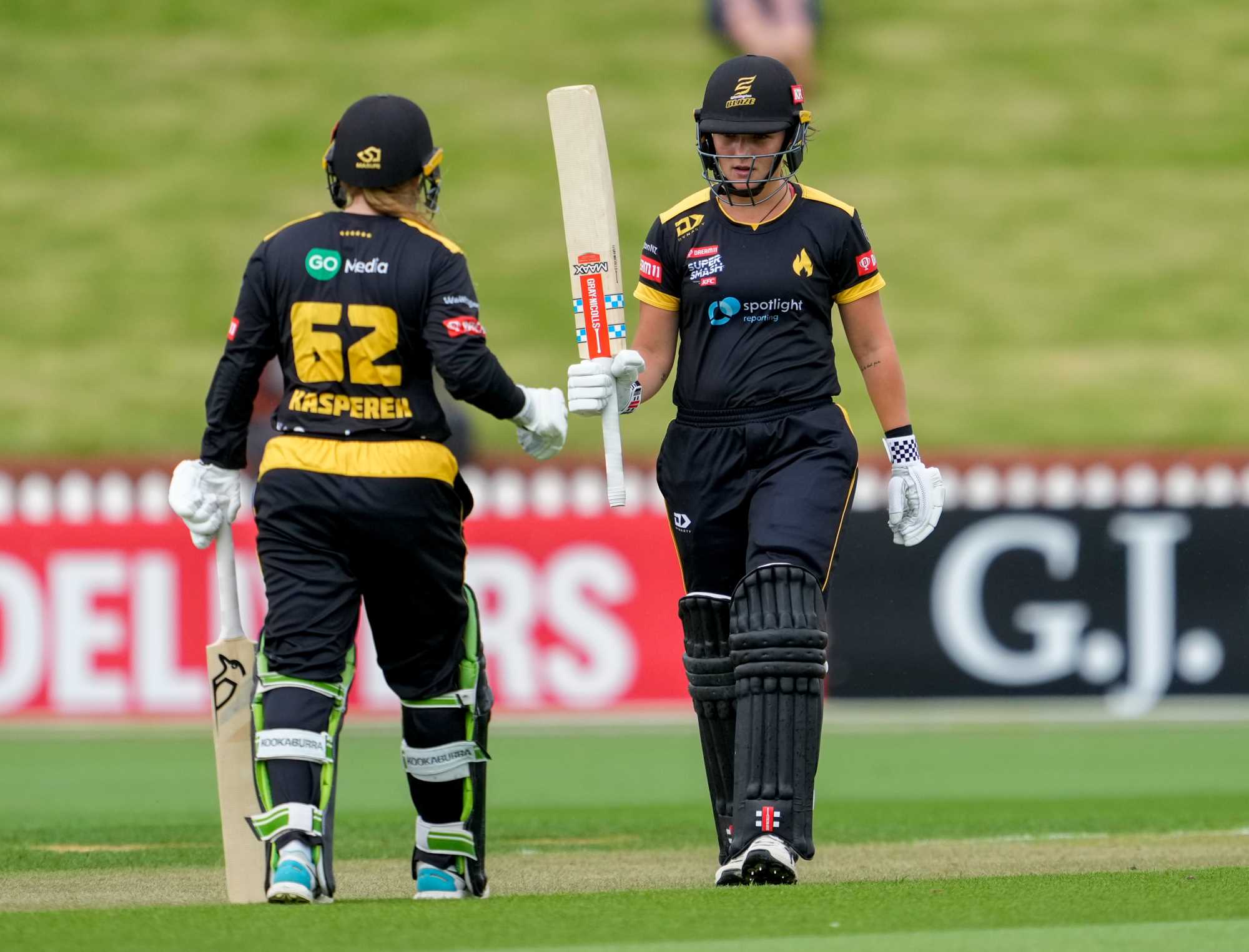 Wellington Blaze has pulled off a superb recovery after early wobbles at the Cello Basin Reserve.

The Central Hinds had turned up for the big match with reinforcements for their second game of the league - WHITE FERN Rosemary Mair coming in for her first start of the season, post injury.

Mair made an almost immediate impact - striking with just her fourth ball of the summer as Georgia Plimmer was caught behind for no score.

Mair instantly invigorated the Hinds' attack as the Blaze struggled for momentum in the opening power play.

Claudia Green quickly took care of Rebecca Burns and then a wicket maiden from Hannah Rowe in the sixth - removing Blaze captain and WHITE FERN Maddy Green at 24/3 - had Central seemingly off to a flier against this traditionally strong side.

The star young allrounder shrugged off any pressure and regained control with a smart, big half century - her second in as many matches.

Kerr (62) was joined by fellow WHITE FERNS tweaker Leigh Kasperek (60 not out) and the pair constructed a superb partnership of 99 for the fourth wicket.

Indeed, it was a new fourth wicket T20 record for Blaze - breaking the mark of 81 that the same class pair had posted together against the Canterbury Magicians at Hagley Oval in the opening game this season.

Once again they steadied the ship, then put the foot down with some fat overs - taking 14 off the 12th, 15 off the 14th, and Kasperek finishing on point with 15 off the last with Thamsyn Newton, after Kerr's exit for a very fine 62 off 49 in the penultimate over, at 123/4.

So the Blaze recovered to 144 for four in their 20, and there were early signs that would prove way too much for the Hinds.

Historically often relying on their top order to do the job, big early wickets cost the visitors from the Districts dearly - with experienced opener Natalie Dodd searching for support at 12/3.

Kasperek had just claimed the big wicket of Rowe in a wicket maiden - a dose of Rowe's own medicine.

Jess Watkin and Emily Cunningham were already back in the pavilion by then after a great start from Maneka Singh (3-13) in the windy conditions, the hard hitters dismissed in the space of three balls.

Kerr had the luxury of coming on in the ninth with the score already 35/5 and the Hinds under serious pressure as the equation climbed on them.

She soon made it six down in her first over, accounting for the flairy spinning allrounder Georgia Atkinson who could not repeat her near-heroics from the previous game in Dunedin.

The Hinds were in grave danger now of not only losing the match, but of recording their lowest T20 total which stood at 56 in the recordbooks. They found themselves 44/7 at the end of 11 overs - having just lost Dodd for 24.

Mair joined teenage up-and-comer Ocean Bartlett with a massive job on their hands, and they did manage to push past the dreaded record low score.

But the writing was on the wall: this was Blaze's show now, and the hosts wrapped up a huge 65-run win (the fifth biggest in their history) when the Hinds were rolled for 79 in 18 overs.