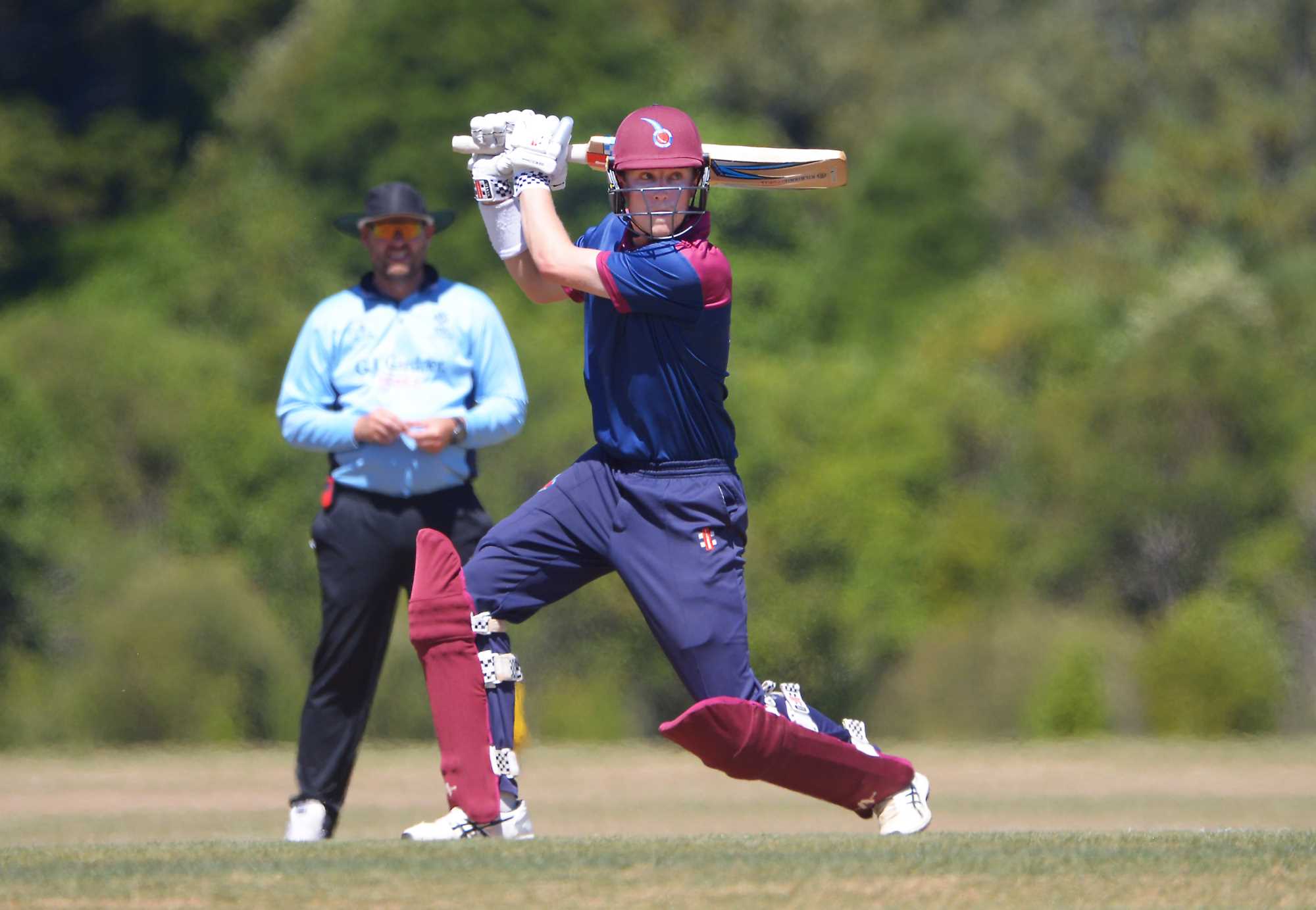 Georgeson’s 85 not out books Eastern Suburbs spot in final

Upper Hutt’s decision to bat first didn’t start well when Callum McLachlan was caught off Luke Georgeson in the seventh over. An over later, Jamie Gibson had Shivang Choudhary out caught as well, putting Upper Hutt on 25-2.

In the 11th over, Jaynesh Patel was caught behind to give Georgeson his second wicket of the match. A 32 run partnership steadied the ship, until Jed Wiggins got Thomas Jones in the 22nd over for 20.

Another 30 runs was added for the fifth wicket, then Ollie Newton was caught off Felix Murray for 21. In the 35th over, Murray got his second wicket of the innings, when he bowled Bhavik Patel for 23, taking the score to 94-6.

Jacob Logan came on and picked up the wicket of Nish Desai, out caught in the 38th over. Three overs later, Navroz Singh was run out by Adam Leonard, putting Easts in control at 116-8.

Ili Tugaga bowled Thijs Turner in the 47th over, with Easts needing just one wicket to bowl Upper Hutt out. The batting side finished the innings nine wickets down, with Tyler Simpson finishing on 21 not out, bringing the side to 155-9 after their 50 overs.

Upper Hutt needed wickets early on to put pressure on Eastern Suburbs and Ollie Newton did just that when he got the star player Lauchie Johns out caught in the second over.

Eastern Suburbs batters Luke Georgeson and Jed Wiggins combined for a 150 run partnership to chase down the total, just one wicket down. Georgeson finished on 85 not out and Wiggins got 64 not out to land Easts a spot in the final on Monday against Johnsonville.

Weerasundara leads from the front, scoring 66* and taking 4-10, to give Johnsonville major momentum heading to final on Monday

Even though Karori won the toss and chose to bat first, it was Johnsonville who got off to a good start, with Max Petrie getting Fraser Harding out caught in the second over. 69 runs were added for the second wicket though, until Jakob Bhula was bowled by Jeremy Benton for 35.

In the 23rd over, Benton got another, Sam French caught. Five overs later, Raki Weerasundara got the big wicket of Harry Wright, out caught for 46. In the 30th over, Weerasundara struck again, getting Liam Roche out caught, putting Karori on 99-5.

Weerasundara got his third wicket four overs later, when he got Jonny Fletcher out caught. In the 36th over, he got his fourth, Daniel Pile caught behind. The skipper bowled superb, finishing with figures of 4-10 off 10 overs.

Four overs later, Andrew Fletcher was out LBW by Connor Lusty. In the 42nd over, James Hartshorn was run out by Gareth Severin and Lusty got Karori’s last wicket, Michael Snedden LBW, to bowl Karori out for 121.

40 runs were added for the third wicket, until Devan Vishvaka was caught off Roche, who finished with figures of 3-29. A 76 run partnership between Weerasundara and Reece Edgecombe got the side home with seven wickets to spare.

Weerasundara finished with 66 not out, as well as 4-10, a true captain’s performance heading into the big final on Monday against Eastern Suburbs, a replay of the T20 final this season.

Onslow won the toss and elected to bat first, however things didn’t get off to a great start, with Ben Piesocki getting caught behind off Pat Smith in the fifth over. Three overs later, captain Sean O’Connor was caught off Matt Kelly, taking the score to 15-2.

In the 11th over, Pat Smith struck again, getting the key wicket of Tim Robinson caught behind. Smith then got Nathan Robinson out the same way, caught behind in the 13th over, to put Onslow in trouble at 30-4.

An over later, Sam Keegan was also caught behind, but off Jono Tuffin. Yet another caught behind happened three overs later, when Logan Malthus was out by Smith again. Smith got his fifth wicket of the innings, getting Matthew Scoble out caught, to finish with figures of 5-21.

At 40-7, Onslow were in great trouble, however Micah Conroy and Daniel Rose combined for A 59 run partnership to give the side hope. Rose was eventually caught behind off Tuffin in the 28th over, finishing on 22 off 29 balls.

Nick Greenwood came on and bowled George Holmes two overs later. In the 32nd over, Joshua Dean was caught and bowled by Kieran McComb, with Onslow getting bowled out for 107.

Onslow desperately needed early wickets and they got that when Daniel Rose bowled Toby Barton in the second over. The next ball, he got Mitch Scott out LBW, to put Taita under pressure at 9-2.

Unfortunately for Onslow, Nick Greenwood and Deepak Joon cruised along and got their side home with eight wickets in hand. Greenwood finished on 68 off 47 balls and Joon finished on 30 off 35 balls, in a strong batting display under pressure.

This result means that Taita finish in third place, whereas Onslow finish in last place, meaning they will be playing their one day cricket in the Hazlett Trophy next season.

Hutt District got off to an exceptional start, with Sam Mycock and Caleb Montague putting on 107 for the first wicket, until Montague was bowled by Wade Mckenzie for 56 in the 23rd over.

A breathtaking 225 run partnership between Mycock and Chander Ravi really put the game heavily in Hutt’s favour, with both players ending the 50 overs unbeaten with centuries.

Mycock finished on 141 off 151 not out, his third century of the season and Ravi ended with 130 off 88 not out, in an incredibly strong batting display by Hutt District, who finished on 332-1 in their 50 overs.

Sam Miheil got Hutt District’s defence off to a great start, bowling Wade Mckenzie in the second over. 47 was added for the second wicket, until Scott Jones was bowled by Mac Kennerley in the 16th over.

Two overs later, Kennerley got another, getting Nathan Stirling out caught. 55 runs were added for the fourth wicket, until Shane Stratford was bowled by Montague for 44 in the 28th over.

Three overs later, Andrew Drummond was caught off Tashkoff. A ball later, Kieran Butler was bowled by Tashkoff for 43 off 40 balls, taking the score to 124-6. In the 34th over, Calem Taylor was out LBW by Montague.

Tashkoff bowled Jamie Fevre and got Luke Minihan LBW, to finish with an impressive 4-49. Chander Ravi ran out Elliot Seddon, leaving Craig James stranded on 20 off 9 balls not out, bowling Petone out for 157, 175 runs short of Hutt District’s target.

This match gives Hutt District the perfect unbeaten season, where they will be playing in the Ewen Chatfield Trophy next season. Petone finished the season in fourth place.

North City finish in second place, thanks to 108 from Nithyaganesh

North City started well, scoring 40 off the first seven overs, however Russell Hughes got out in the eighth over, out LBW by Finn McQueen for 21. The second wicket partnership put on 44 runs, until Gurpreet Singh Panesar bowled Sheil Gandhi for 29.

In the 30th over, Fraser McHale was caught behind off Rogan Vekony for 20, taking the score to 122-3. 59 runs were added for the fourth wicket, until Kinal De Silva was caught and bowled by Finn McQueen.

Ruben Nithyaganesh and Samuel Millmow added 88 for the fifth wicket, until Nithyaganesh was finally out caught off Campbell Webster in the 49th over, finishing on a clinical 108 off 120 balls, a great knock.

North City’s defence got off to a good start, when Drew MacDonald was bowled by Gurpreet Singh Panesar in the first over. 34 was added for the second wicket, until Isaac Young was caught and bowled off Niko Brooky, taking the score to 38-2.

Five balls later, Ryan Jackson was caught behind off Samuel Millmow. In the 11th over, Regan Craig got out the exact same way, caught behind by Millmow, to put Naenae in trouble at 43-4.

They did show some fight though, with 64 being added for the fifth wicket, until Issac Harris was caught off Stuart Veitch. Two overs later, Michael Stirling was also caught off Veitch, with Naenae on 118-6.

Drew MacDonald picked up three wickets of the tail, two caught behind and one bowled, as well as a wicket from Tim Waimotu, to give North City the 135 run win. MacDonald finished on 4-40 in a good display of death bowling, giving North City the second placed finish.

Rogan Vekony finished on 64 not out, however it wasn’t enough, with his side remaining in fifth spot.

Victoria University started really well, with their openers putting on 72 for the first wicket. Ben Strang was eventually out caught in the 12th over, by Raj Kumar for 39 off 40 balls. An over later, his opening partner Robbie Selbie was caught behind off Samson Sola for 28, putting the score at 74-2.

In the 15th over, Joel Harden was out the same way, caught behind off Sola. 68 runs were added for the fourth wicket, shifting the momentum, until was caught off Anubhav Thapa for 31. Connor Jarden fell two overs later to Thapa as well, this time LBW, with the match now in the balance at 151-5.

Matt Fowler was finally out caught in the 39th over, by Selvaratnam, finishing with 47, a strong knock. Ben Wilson and Jimmy Thompson added 25 for the seventh wicket, until Thompson was stumped off Adi Ogra in the 44th over.

No more wickets were taken, with Ben Wilson smashing the ball around to get his side to 247-7 after their 50 overs, with Wilson finishing on 52 off 50 balls not out, a game-changing knock.

Jimmy Thompson struck early, getting the big wicket of Louis Worthington out caught in the very first over of the Collegians innings. 91 runs were added for the second wicket, until Matthew Vercoe-Curtis was caught off Tom Valentine for 45.

A massive 141 run partnership between Adi Ogra and Cam Meads looked likely to give Collegians the victory, however Meads was out caught off Jimmy Thompson in the 49th over, finishing on 77.

At this stage with eight balls left, Collegians needed 12 runs to win. In the final over, Sahir Hussain bowled Jordan McDermott and keeped the over to just three runs in a great death bowling over, to put Collegians four runs short.

Ogra finished on 92 not out, however couldn’t get his side over the line, with Collegians finishing the competition in sixth place. Victoria University ended their campaign in third place.