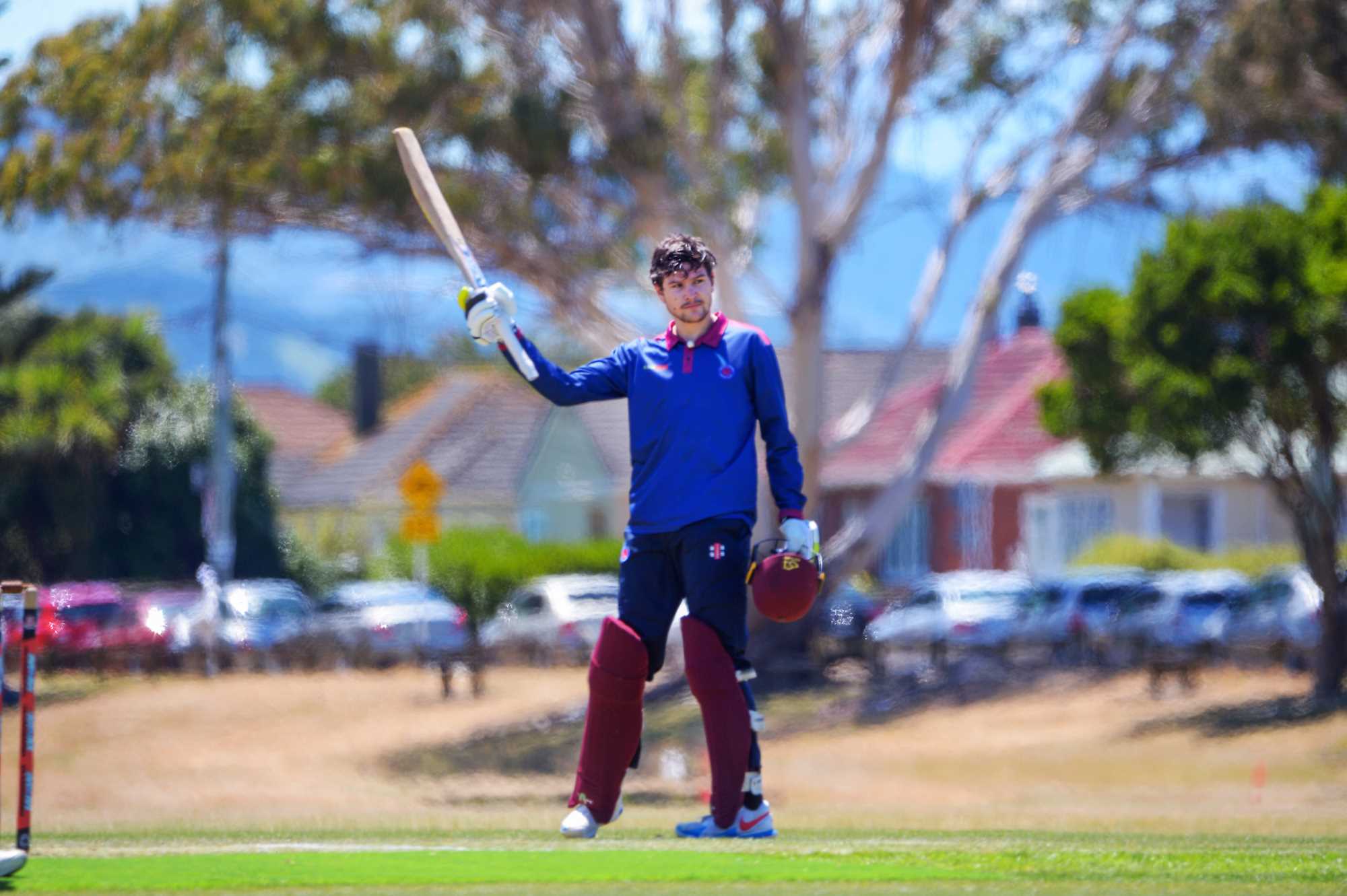 Easts won the toss and elected to bat, however it did not get off to a great start, with Luke Georgeson getting out caught in the second over by Pat Smith. A 95 run partnership for the second wicket was crucial, until Jed Wiggins was caught behind by Will O’Donnell, making the score 110-2.

103 runs was added for the third wicket between Lauchie Johns and Jamie Gibson, then Gibson was caught off Nick Greenwood for 55. In the 43rd over, Jacob Logan was caught behind off Greenwood for 21, with the score at 269-4.

Two overs later, Johns was finally out, stumped off Greenwood, finishing on 177 off 134 balls, another mind blowing knock from the opener. Matt Kelly picked up one wicket, as well as Smith taking three more at the death, to have Easts finish on 335-9 after their 50 overs.

Johns takes the headlines for his amazing knock, as well as Smith taking 4-62 in the innings.

Taita got off to a solid start in their innings, until Greenwood was bowled by Gibson in the seventh over. Two overs later, Gibson got another, Mitch Scott caught behind. Wiggins came on in the 12th over and bowled the dangerous Toby Barton, who got 42 off 34 balls.

Ili Tugaga got Brett Johnson in the 16th over out caught, taking the score to 70-4. Deepak Joon and Nik Swain added 50 for the fifth wicket, until Joon was caught off Murray for 33. Jacob Logan came on and got Will Greenwood out caught.

Logan and Murray took two wickets each of the tail, Logan’s wickets both bowled and Murray’s being a caught and bowled and a caught behind. Nik Swain scored 38 off 49 balls, however it wasn’t enough, with Taita getting bowled out for 162, another massive win for Easts.

Johnsonville got off to a great start after winning the toss and batting first. An opening stand of 61 was important, until Scott Mudgway was out caught off Matt Scoble for 23. 79 runs were added for the second wicket, until Devan Vishvaka was caught off Max Sargentina for 65, with the score at 140-2.

Gareth Severin and Raki Weerasundara scored 96 between them, with Severin getting out caught by Joshua Dean for 109 off 109 balls in a mature knock for his side. Dean struck again four balls later, getting Weerasundara stumped for 31 at the death.

George Holmes got Reece Edgecombe caught in the 48th over, but the damage had already been done, with Johnsonville finishing on 284-5 in the 50 overs, a strong team batting performance.

Onslow’s chase got off to a brilliant start, with Sean O’Connor and Nick Pile adding 51 for the first wicket after just seven overs, until O’Connor was caught off Zac Ringrose for 25. Pile fell soon after, also caught off Ringrose, for 28.

Ringrose got his third when he got Daniel Rose out LBW in the 14th over, putting Onslow at 71-3. Ethan Jefferson was also LBW but by Scott Edgecombe six overs later. A 37 run partnership between Ben Piesocki and Duncan Mutch occurred, until Mutch was caught off Connor Lusty, with the score at 120-5.

Piesocki was out an over later, caught off Weerasundara for 24. Weerasundara picked up the last three wickets, Sargentina LBW, Holmes caught for 17 and Scoble caught for 15, to finish with figures of 4-22, bowling out Onslow for 154.

Karori got off to a perfect start with the ball, with Michael Snedden getting Jaynesh Patel out caught behind in the second over. James Hartshorn followed that up in the next over, getting Callum McLachlan out caught, to put Upper Hutt on 2-2 after three overs.

They steadied the ship, adding 29 for the third wicket, until Shivang Choudhary was out caught behind off Alex O’Malley for 15. Thomas Jones and Matt Taylor added 74 for the fourth wicket, with Jones getting bowled by Liam Roche for 34 in the 26th over, with the score at 105-4.

Two overs later, Roche struck again, getting Matt Taylor caught and bowled for 46 off 38 balls. Jakob Bhula got Navroz Singh caught in the 36th over. Daniel Pile struck twice, getting Bhavik Patel out caught and bowling Nish Desai, with the score at 146-8.

Snedden and Bhula picked up another wicket each to bowl out Upper Hutt for 179, still a very competitive total.

The new opening pair of Pile and Murray did well to see off the new ball, with 33 being added in their opening stand, until Murray was caught behind off Jaynesh Patel for 16. Patel got the massive wicket of Bhula in the 16th over caught, as well as Andrew Fletcher LBW, to put the game in the balance at 71-3.

In the 27th over, Pile was run out by Thomas Jones for 36. A crucial partnership of 61 put Karori back in control, until Patel got Jonny Fletcher caught for 39. Upper Hutt struck again the next over, Roche caught behind off Bhavik Patel for 33.

Five overs later, Lahiru Sandeep got Josh Allardice out caught for 11, taking the score to 166-7. Snedden was bowled by Choudhary an over later, putting the match on a knife's edge.

In the 46th over, Nick Cooke was run out by Nish Desai, with Upper Hutt now needing just one wicket and Karori needing 12 runs to win.

Karori added seven runs to the total, needing five more runs to win, until Sandeep got Alex O Malley out LBW, to give Upper Hutt the crucial comeback victory, which moved them out of the relegation zone.

Victoria University’s decision to bat first did not look promising when Iain McPeake got Amer Hussain out caught in the first over of the match. 31 was added for the second wicket, until Joel Harden was out LBW by Sam Mihell. Two overs later, Mihell got another, Robbie Selbie out caught for 19, bringing the score to 34-3.

In the 17th over, Chander Ravi struck twice, getting Rhys Bayly caught and Matt Fowler LBW for 26. Two overs later, he got his third wicket, Ben Strang caught. Baahul Gandhi came on and got two wickets, Sahir Hussain caught and Connor Jarden LBW, to put Vic Uni on 107-8.

Jesse Tashkoff picked up the last two wickets, Tom Valentine caught behind and Lewys Jones LBW, to bowl out Victoria University for 129.

Hutt District’s opening pair of Mycock and Montague again did well, scoring 50 for the first wicket, until Mycock was bowled by Lewys Jones in the tenth over for 25. Montague and Ravi added 41 more runs, until Montague was bowled by Tom Valentine for 37, with the score at 91-2.

McPeake was stumped off Valentine in the 24th over, with the score at 125-6. Ben Skilton and Sam Fraser got the side home with four wickets to spare, in another strong performance by Hutt District. Valentine finished on 4-26, in a spell that changed the game completely.

Collegians got off to a superb start, getting Naenae’s top run scorer Gurpreet Singh Panesar out caught in the fifth over by Vivek Lala. Six overs later, Isaac Young was caught behind off Selvaratnam, to put Naenae on 39-2.

Adi Ogra came on and started strongly, bowling Regan Craig in the 14th over. A game-changing 89 run partnership between Ryan Jackson and Rogan Vekony swung the match in Naenae’s favour, then Jackson was bowled by Lala, finishing on 62.

Michael Stirling batted brilliantly, scoring 38 off 27 balls, until Ogra bowled him in the 43rd over. Vekony was caught behind by Ogra two overs later, scoring 67 in a classy knock for his side.

Collegians brought it back at the death though, with Samson Sola bowling three of Naenae’s lower order and Lala bowling one, to bowl out Naenae for 234, a massive fightback by Collegians.

The openers got the side off to a solid start, adding 36 for the first wicket, until Louis Worthington was bowled by Campbell Webster in the 11th over. An over later, Matthew Vercoe-Curtis was gone, caught behind off Panesar, making the score 37-2.

Scott Oldham was out caught by Ciaran Hargreaves in the 24th over for 20. Then an over later, Cam Meads was caught behind off Webster. In the 26th over, Jordan McDermott was bowled by Hargreaves, to put Collegians under the pump at 75-5.

Eight overs later, Adi Ogra was caught off Stirling for 26, a big wicket. 83 runs were added for the seventh wicket partnership between Samson Sola and Anubhav Thapa, until Sola was caught off Webster for 32. Thapa fell two overs later, stumped off Adam Webster, for 51, to put Collegians on 183-8.

Adam Webster ran out Selvaratnam, with Collegians now needing 27 runs to win and Naenae needing just one wicket. McNaught was bowled by Panesar in the last over, to give Naenae the 24 run victory.

Petone started well, with Craig James bowling the in-form Sheil Gandhi in the fifth over. 53 runs were added for the second wicket, until Russell Hughes was caught off Luke Minihan for 33. Ruben Nithyaganesh fell shortly after, bowled by Jamie Fevre for 31, with the score now at 83-3.

Kinal De Silva was caught behind off Kieran Butler in the 28th over for 14. The 135 run partnership between Fraser McHale and Samuel Millmow flipped the match on it’s head, with McHale finally being out caught in the 47th over for 91 off 85 balls, a stunning knock.

Rory Woolett and Craig James combined to run out Shivi Kulugammana in the 48th over, then Millmow and Brooky batted out the rest of the innings, to finish on 269-6. Millmow finished on 83 off 77 balls not out.

Niko Brooky got North City’s defence off to a great start, when he got James Hanson out caught in the fifth over. Shane Stratford fell to Brooky two overs later, also out caught. Sam Millmow got the crucial wicket of Wade Mckenzie in the tenth over, caught for 30 off 23 balls, with the score at 49-3.

A 58 run partnership for the fourth wicket between Kieran Butler and Nathan Stirling kept Petone in the hunt, until Butler was caught and bowled off Stuart Veitch in the 24th over for 29. An over later, Andrew Drummond was caught off Tim Waimotu, to put Petone on 108-5.

Stirling fell four overs later, out caught off Veitch for 43. Drew MacDonald got Calem Taylor out LBW in the 32nd over, to swing the game in North City’s favour. Veitch got his third wicket of the match, Fevre out caught, to put Petone on 152-8.

Brooky and Millmow each got a wicket, to give North City the crucial victory by 77 runs.