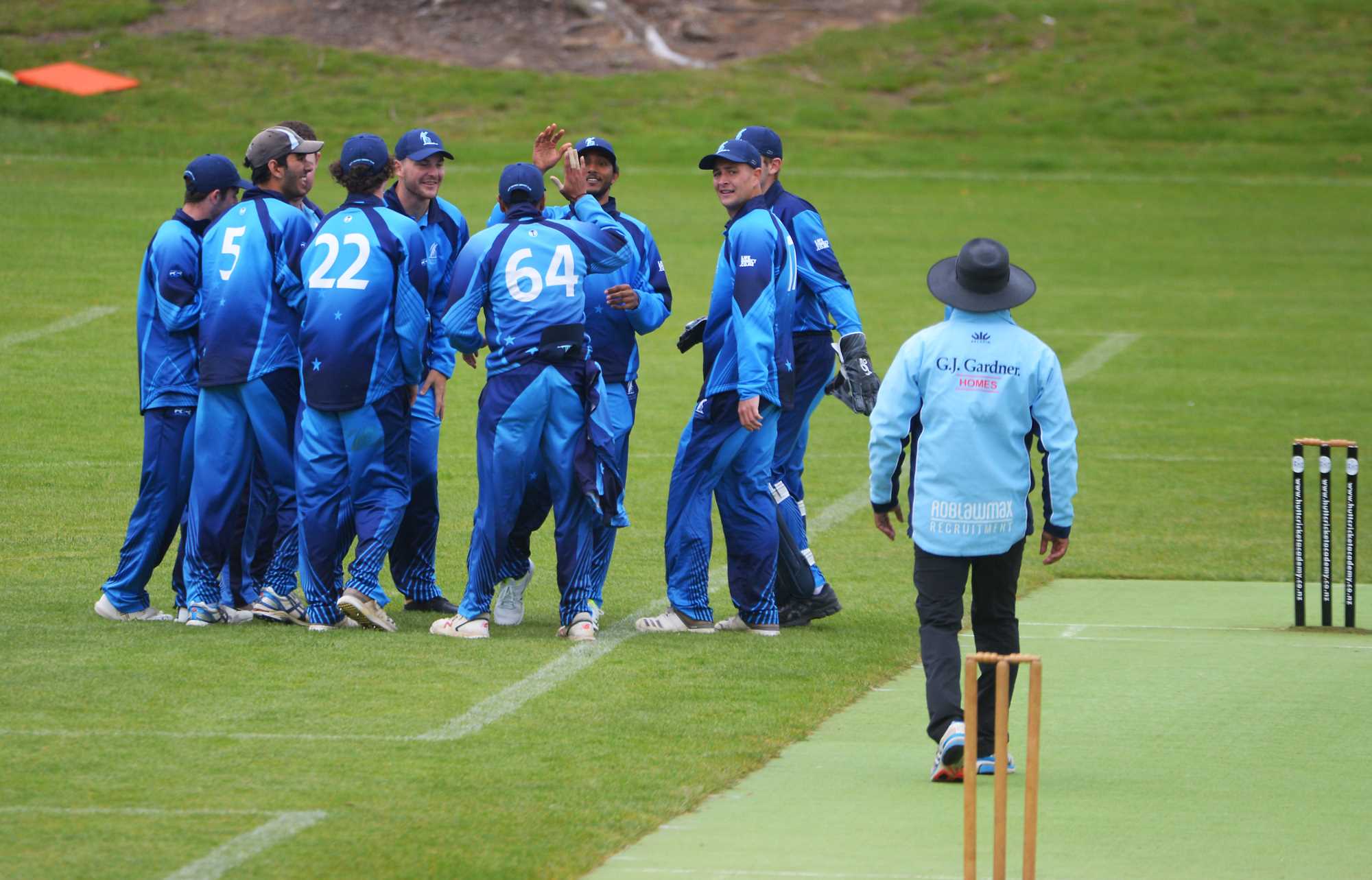 Taita won the toss and batted first in the replay of the Ewen Chatfield Trophy final. Toby Barton and Nick Greenwood put on 36 for the first wicket, until Dom McAlister bowled Barton for 16.

In the 11th over, Greenwood was also bowled, but by Zac Ringrose for 23, a crucial wicket. Then, the in-form Connor Lusty got Mitch Scott out caught and bowled, to put Taita at 93-3.

Two overs later, Lusty had captain Nik Swain caught, swinging the match in Johnsonville’s favour. Kevin Weerasundara came on to bowl and continued the momentum, getting Brett Johnson out stumped in the 34th over.

Two overs later, Weerasundara took another, Meet Solanki out caught, to put Johnsonville on top at 110-6. In the 37th over, it was the other Weerasundara, captain Raki, that was involved in the run out of Matt Kelly.

Lusty finished his spell with another wicket, getting Will Greenwood LBW. Kevin Weerasundara got Kieran McComb stumped and Jeremy Benton had bowled Pat Smith for 20, to bowl out Taita for 149.

Taita needed an early wicket and that's what Kieran McComb gave them in the fifth over, when he bowled Scott Mudgway.

A 76 run partnership between Devan Vishvaka and Gareth Severin was crucial, until Severin was caught behind by Johnson for 55 off 55 balls in a stellar knock. Vishvaka fell three overs later, out LBW by McComb for 30.

McComb struck again soon after, getting skipper Raki Weerasundara out caught in the 24th over. Josh Mann and Jeremy Benton looked likely to get the side home, until Mann was out caught off Matt Kelly for 16.

Benton and Kevin Weerasundara got the side home in the 32nd over, with five wickets spare. Benton finished on 21 not out, giving his team the major victory over the reigning champs.

Karori’s decision to bat first got off to a bad start when Luke Georgeson got Andrew Fletcher out LBW on the very first ball of the game. The in-form Jakob Bhula came in and was out caught by Jacob Madigan in the fourth over.

Sam French was bowled in the same over by Madigan to put Karori at 15-3. An over later, Georgeson struck again, getting Fraser Harding out caught. 20 was added for the fifth wicket, until Josh Ormrod had Jonny Fletcher out caught behind in the 11th over.

Liam Roche and Yashraj Kalsi gave Karori hope, scoring 62 runs for the sixth wicket. Kalsi was bowled by Jed Wiggins in the 27th over for 22. Captain James Hartshorn was given out LBW off Jacob Logan, putting Karori on 99-7.

Roche fell in the 35th over, out caught off Wiggins for 51, a crucial knock for his side. Wiggins picked up his third wicket when he got Daniel Pile out caught. Jakob Vandenburg was stumped off Felix Murray in the 41st over to have Karori bowled out for 118, a strong team bowling display by Easts.

The opening pair of Georgeson and Johns went hard at the total and scored 73 runs in the first eight overs, until Johns was bowled by Daniel Pile for 34 off 15 balls, a great knock that lifted the pressure off Easts.

Georgeson and Wiggins got the side home in the 17th over, a major help for their net run rate, with Georgeson finishing on 58 off 61 balls. This win moves Easts much closer to Karori on the table and well ahead of the trailing pack.

Onslow won the toss and batted first in this must-win game for both teams. It didn’t get off to a great start when Hayden Curtis got both Alex Thompson and Micah Conroy out caught in the fourth over, putting Onslow at 14-2.

Captain Sean O’Connor fell in the ninth over, caught off Lachie Bailey for 19. A partnership was needed and Sam Keegan and Oscar Jackson gave their side hope with a 67 run partnership for the fourth wicket. Jackson was caught from Lahiru Sandeep’s bowling for 42 off 39 balls in the 19th over.

Both Logan Malthus and Hamish Kyne were also caught from Sandeep’s bowling in the 23rd and 25th overs, putting the side in trouble at 101-6. Thijs Turner got Daniel Rose caught behind in the next over, with Upper Hutt in command.

Matthew Scoble and George Holmes both fell to Shivang Choudhary, Scoble LBW and Holmes bowled to put Onslow at 137-9.

Sam Keegan was still at the crease though, with him and Joshua Dean combining for a 71 run partnership to swing the game Onslow’s way. Keegan was explosive at the death and was run out in the final over for 114 off 128 balls, an outstanding knock given the circumstances.

Keegan helped to shift the momentum Onslow’s way and that continued into the second innings, with Upper Hutt captain getting out LBW in the sixth over by Scoble. A 56 run partnership between Jaynesh Patel and Shivang Choudhary was much-needed, until George Holmes bowled Patel for 20.

Holmes struck again two overs later, getting Choudhary out caught behind for 35 off 41 balls. Lachie Bailey and Charlie Wilson added 25 to the total, until Rose had Wilson out caught in the 31st over.

Holmes picked up his third wicket of the game, Flynn Ruscoe out LBW. Captain Sean O’Connor came on and went through Upper Hutt’s lower order, Tom Brooks and Sandeep caught and Sean Lynch bowled, to take three wickets and swing the match in Onslow’s favour.

Rose got the final wicket, Hayden Curtis caught, to give Onslow the much-needed victory. Lachie Bailey finished on 78 off 77 balls not out in an entertaining knock. This bonus point win sees Onslow go ahead of Upper Hutt by one point with two matches to go.

In this massive game, North City batted first and got off to a quick start, until Shaun Bishop was out caught behind by Iain McPeake for 25 off 16 balls. Four overs later, Russell Hughes fell, caught off Will Brunton.

45 was added for the third wicket, until Ruben Nithyaganesh was caught behind off Daniel Rae. Jay Patel was out LBW by Ben Skilton in the 29th over to put North City at 97-4.

Three overs later, McPeake struck again, getting Kinal De Silva caught behind. In the 37th over, Sheil Gandhi was out LBW by Jesse Tashkoff, finishing on 60, a good knock under pressure.

Three wickets fell in quick succession, Matthew Blair got bowled by Baahul Gandhi, Niko Brooky was caught behind off Skilton and Drew MacDonald was also bowled by Gandhi, to put North City in trouble at 154-9.

49 crucial runs were added for the last wicket between Samuel Millmow and Stuart Veitch. Millmow was run out in the last over by Sam Fraser,  finishing on 42 off 54 balls. North City were bowled out 195, a competitive score.

The strong opening pair of Sam Mycock and Caleb Montague got off to a strong start, adding 60 for the first wicket, until Mycock was out LBW by Niko Brooky for 15. Montague fell the very next over, with Samuel Millmow getting him out caught for 35.

In the 17th over, Blair ran out Tashkoff and then Brooky had Will Stevenson out LBW first ball to put the match on a knife’s edge at 78-4. A crucial 73 run partnership between McPeake and Peter Bonar helped Hutt District massively. Bonar was eventually bowled by Blair in the 29th over for 31.

Blair struck again two overs later, getting Skilton out caught. Hutt District looked to be cruising, until McPeake was out LBW by Millmow for 61 off 63 balls, to swing the game back to a level playing field.

Sam Fraser and Baahul Gandhi held their nerve under immense pressure, to give Hutt District the victory in the 39th over, with three wickets in hand. This win gives Hutt District the Hazlett Trophy for the one dayers.

Petone’s decision to bowl first looked great when Craig James got Matthew Vercoe-Curtis out LBW in the third over. The very next over, Kieran Butler had Louis Worthington out caught behind to put Collegians in trouble at 13-2.

28 was added for the third wicket, until Avi Singh was caught off Luke Minihan. A crucial 60 run partnership between Scott Oldham and Cam Meads gave Collegians some balance, until Cam Fenton got Oldham caught for 41.

Elliot Seddon struck twice in quick succession, getting Jordan McDermott out LBW and Samson Sola caught and bowled. Craig James came back on and got Harley Smith caught, to put Collegians at 126-7.

Seddon bowled Euan McNaught in the 36th over, to put Petone on top. In the next over, Cam Meads was out caught by Craig James for 66 off 74 balls, a crucial knock for his side. Seddon got his fourth wicket, Selvaratnam out caught and bowled, to bowl out Collegians for 158 and finish on 4-50.

50 was added for Petone’s first wicket, until James Hanson was out caught by Selvaratnam for 13. Shane Stratford fell in the 19th over, caught behind off Samson Sola. Wade Mckenzie was out the next over, LBW by Vercoe-Curtis for 44.

Nathan Stirling got out the exact same way as Stratford, caught behind off Samson Sola to put Petone at 95-4.

Sola got Kieran Butler out caught in the 25th over, a key wicket. Andrew Drummond and Rory Woolett added a crucial 25 runs, until Woolett was out caught off Selvaratnam to put the score at 125-6. Drummond finished on 36 not out and Seddon got 19 off 7 balls not out, to give Petone the four wicket win over Collegians in a close match.

Panesar was caught behind by Hussain in the 32nd over, finishing on 73 runs, a superb knock. Jimmy Thompson had Rogan Vekony caught five overs later to swing the match back to even.

Amer Hussain got Michael Stirling in the 43rd over for eight. The next over, Regan Craig was run out by Ben Wilson for 47, a strong performance. One ball later, Isaac Young was caught behind off Ben Strang.

Strang and Selbie started well, putting on 44 runs, until Selbie was out caught for 33 off 27 balls by Panesar. Ryan Jackson got Rhys Bayly out caught two balls later. Panesar struck five overs later, getting Matt Fowler caught behind, to put Victoria University at 66-3.

33 was added for the fourth wicket, until Strang was caught off Hargreaves, finishing on 48 off 61 balls. Connor Jarden and Ben Wilson also added 33 for their partnership, then Hargreaves got Wilson out for 16.

An over later, Webster got Jarden caught for 24, putting Victoria University at 132-6. In the 36th over, Jimmy Thompson was bowled by Panesar.

At 177-7, it could have gone either way, but Ryan Jackson took two wickets in the same over, Hussain caught behind and McBride LBW to put Naenae in the driver's seat. Campbell Webster got the final wicket, Robinson caught behind, to give Naenae their first victory of the season.