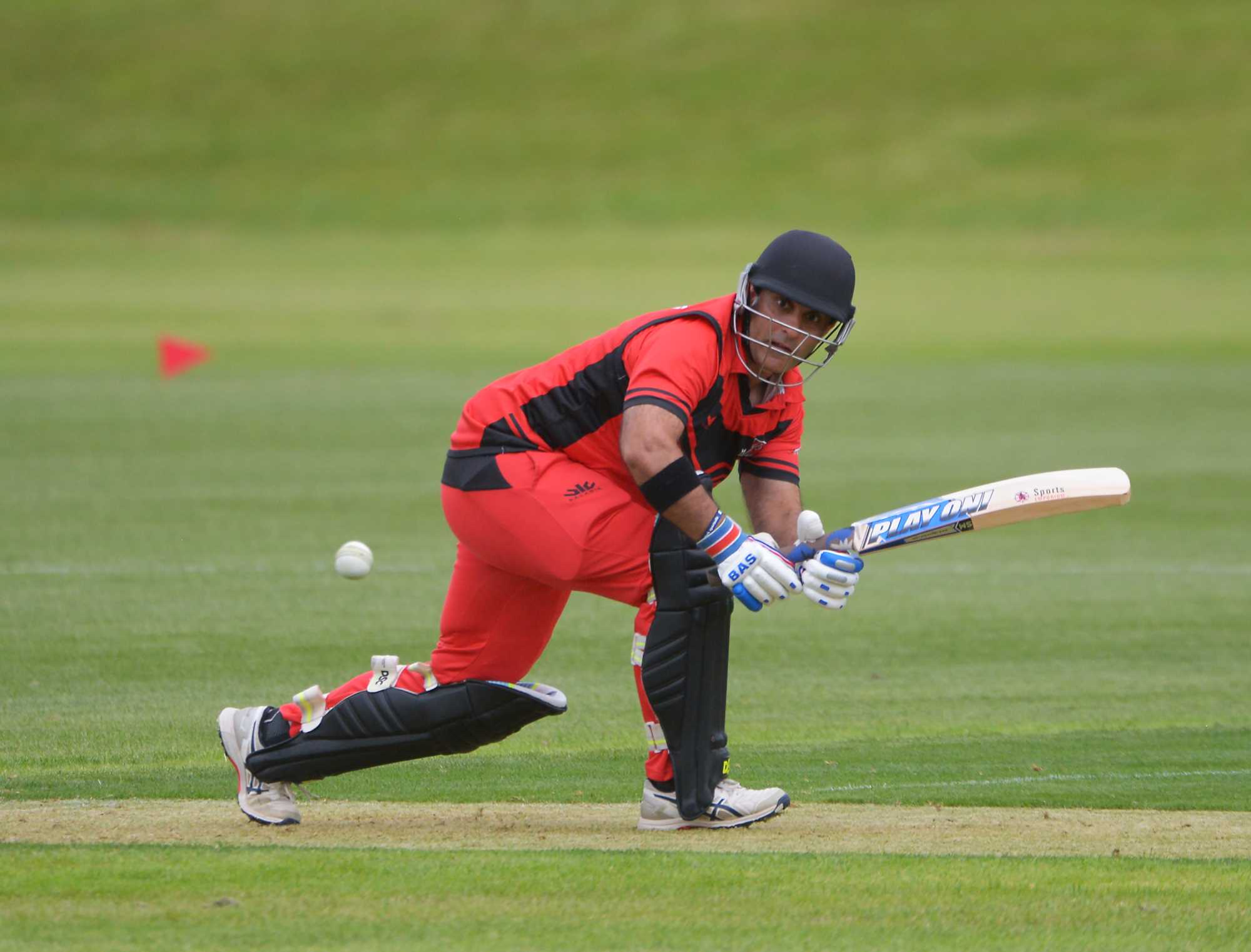 Winning the toss and electing to bat first, Eastern Suburbs got off to a brilliant start, with Lauchie Johns and Jacob Logan putting on 126 for the first wicket, until Logan was out caught by Connor Lusty for 28.

Jed Wiggins and Johns added 45 runs, then Kevin Weerasundara had Wiggins out caught for 15. Dilakshan Sasikumar was caught seven overs later off Zac Ringrose for 12. For the fourth wicket, Johns and Jimad Khan put on 75 runs, until Khan was out caught by Reece Edgecombe.

In the 48th over, Jeremy Benton had Xavier Aspell out caught for 12. An over later, Lauchie Johns was finally dismissed, caught off Edgecombe for 212 off 159 balls, in a stunning innings which swung the match in the visitors favour.

Edgecombe got Nate Wiggins out LBW in the same over, however the damage was already done from Johns’ innings, with Easts finishing their 50 overs on 320-7.

Johnsonville got their chase off to a great start, until Scott Mudgway was bowled by Josh Ormrod in the seventh over for 18. Devan Vishvaka and Gareth Severin added 65 for the second wicket, then Severin was stumped off Felix Murray for 43 off 41 balls.

That same over, Raki Weerasundara was out caught behind by Murray, taking the total to 103-3. Murray picked up his third wicket in the 22nd over, Reece Edgecombe, out caught.

Vishvake was run out nine overs later by Ormrod, finishing on 65 off 81 balls. Zac Ringrose and Jeremy Benton fought back, scoring 50 between them, until Ringrose was run out by Jed Wiggins in the 38th over for 34 off 27.

Kevin Weerasundara was bowled by Ormrod shortly after, putting Johnsonville in the driver's seat. Jacob Logan picked up the big wicket of Jeremy Benton, out caught for 57 in the 42nd over.

Aspell ran out Max Petrie and Lusty was bowled by Ormrod, bowling Johnsonville out, giving Eastern Suburbs the 71 run win.

Taita’s got off to a rocky start when Nick Greenwood was run out in the second over by Nish Desai. Mitch Scott was bowled by Desai five overs later, putting Taita in trouble at 28-2. Thijs Turner had Toby Barton caught behind in the 16th over, giving Upper Hutt the advantage.

In the same over, Brett Johnson was given out LBW off Turner. Deepak Joon and Nik Swain steadied the ship with a 56 run partnership, until Joon was out LBW by Bhavik Patel for 26. Patel had Meet Solanki caught and bowled in the 43rd over, with the score at 163-6.

Nish Desai bowled well at the death, bowling Jono Tuffin and having Matt Kelly out caught behind to finish with figures of 3-49. Swain was out caught in the 49th over by Tyler Simpson, finishing on 74 off 117 balls, in a game-changing knock.

Taita finished the 50 overs on 198-9, a competitive total to defend.

Matt Kelly got his side’s defence off to a perfect start when he had Callum McLachlan caught on the first ball of Upper Hutt’s innings. In the third over, Kelly struck again, getting Shivang Choudhary caught behind, with the score at 9-2.

Jay Patel and Matt Taylor rebuilt, scoring 80 runs between them, until Taylor was caught off Kieran McComb for 42. Three overs later, Johnson had Desai out caught, making the score 97-4.

Greenwood picked up two more wickets, Tyler Simpson and Charlie Wilson both out caught, finishing with figures of 4-24. Swain ran out Turner in the 44th over to bowl out Upper Hutt for 144, giving Taita the major 54 run win.

Onslow got off to a good start when Matthew Scoble had Andrew Fletcher caught in the third over. Clark Murray and Jakob Bhula added 39 for the second wicket, then Murray was caught off Scoble’s bowling for 40 off 25 balls.

A game-changing 165 run partnership between Bhula and Sam French swung the match in Karori’s favour. French was eventually out in the 36th over, caught off Daniel Rose. Max Sargentina got Liam Roche out caught four overs later, putting the score at 255-4.

Fraser Harding scored 26 off 20, until he was out caught by Scoble. Jonny Fletcher was bowled by Scoble two overs later, finishing on 20 runs off just eight balls.

Bhula was finally dismissed in the 49th over by Daniel Rose, but the damage had already been done, with Bhula scoring an incredible 165 off 125 balls in a dominant display. Karori finished their 50 overs with a whopping 380-7.

Onslow needed a strong start and they got that, until Rithwick Negi was caught behind off Michael Snedden in the seventh over. Sam Keegan and Nathan Robinson put on 54 runs for the second wicket, until Keegan was out caught off Daniel Pile for 72 off 51 balls in an explosive knock.

Robinson and Conroy kept going in the middle overs, until Robinson was caught off Jakob Bhula for 53. Pile got his second wicket of the match when he got Conroy out caught behind four overs later, putting Onslow at 175-4.

Pile got two more wickets, Oscar Jackson bowled and Logan Malthus stumped, to give Karori the momentum. Henry McIntyre and Daniel Rose added 36 for the seventh wicket, until Rose was caught off Snedden for 36 off 21 balls.

McIntyre was out four overs later, caught off Bhula. Snedden and Bhula each took a wicket of the tail to bowl out Onslow for 288, 92 runs short of the target.

Daniel Rae struck early in this match, when he bowled Michael Stirling in the second over. Iain McPeake did major damage seven overs later, getting two wickets in the same over, having Gurpreet Singh Panesar and Logan Mackinder both out caught, putting Naenae at 31-3.

Taylor Wenlock and Regan Craig added 57 for the fourth wicket, until Wenlock was bowled by Jesse Tashkoff for 21. Craig fell five overs later, when he was given out LBW off Chander Ravi, finishing on 38.

Spin continued to be successful, with Ravi and Tashkoff taking a wicket each, with Ravi bowling Ryan Jackson and Tashkoff bowling Cole Kennedy, bringing the score to 120-7. Campbell Webster fell in the 42nd over, out caught behind by Will Brunton.

Tashkoff picked up his third wicket of the day when he bowled Ciaran Hargreaves in the 43rd over. Scott Good and Finn McQueen batted out the rest of the innings, to give Naenae a competitive score of 154-9.

Hutt District’s opening partnership of Sam Mycock and Jesse Tashkoff got the sides chase off to a great start, adding 61 for the first partnership, unitil Tashkoff was out caught off Finn McQueen for 31. Ravi fell two overs later, caught behind off McQueen, to put the score at 72-2.

McQueen got a third wicket, Caleb Montague out caught behind, to give Naenae some hope. In the 23rd over, Campbell Webster ran out Will Stevenson to put the game on a knife's edge at 95-4.

Ryan Jackson got the big wicket of Sam Mycock three overs later, out caught behind on 50. Peter Bonar and Ben Skilton had their nerve and got the side home with a 54 run partnership, giving Hutt District the five wicket win. Bonar finished on 32 off 21 and Skilton finished on 22, in a great partnership for their side.

30’s from Strang, Bayly and Wilson give Victoria University win in low-scoring battle against Petone

Petone lost their first wicket in the eighth over when Scott Jones was out caught by Sahir Hussain for 19. Five overs later, Brett McBride got James Hanson out caught for 17, bringing the score to 58-2.

31 runs were added for the third wicket until Nathan Stirling was caught and bowled by Amer Hussain for 22. Wade Mckenzie fell two balls later when he was caught behind off Tom Valentine for 22.

In the 30th over, Kieran Butler was out caught off Ben Strang, putting the score at 116-5. Two overs later, Strang bowled Rory Woollett, swinging the game in Victoria University's favour. Valentine got Andrew Drummond out caught in the 37th over to put Petone on 126-7.

26 handy runs were added for the eighth wicket, until Strang picked up his third wicket, Calem Taylor out caught. Amer Hussain got the last two wickets of the tail, Elliot Seddon bowled on 26 and Luke Minihan, to bowl out Petone for 152.

Victoria University always starts quickly and this match was no different, being on 34 after four overs, until Robbie Selbie was bowled by Craig James. Strang fell four overs later when Scott Jones had him caught behind for 32 off 33 balls.

51 was added for the third wicket in a crucial partnership between Matt Fowler and Rhys Bayly, then Fowler was out caught off Calem Taylor for 20. An over later, Seddon got Connor Jarden out LBW, making Victoria University nervous at 96-4.

Two overs later, Seddon struck again, getting Bayly out caught and bowled for 32, a major wicket. 32 runs was added for the sixth wicket, until Ben Wilson was caught off Taylor, for 30 runs off 30 balls.

Amer Hussain and Jimmy Thompson held their nerve and got their side home, each scoring 13 not out, to give Victoria University the tight four wicket victory.

91 from Hughes leads North City to strong victory over Collegians

North City’s decision to bat first looked to be the right one, when Russell Hughes and Shaun Bishop put on 105 for the first wicket. Bishop was finally caught off Anubhav Thapa in the 19th over for 65 off 58, in an explosive knock.

Hughes and Sheil Gandhi added 72 more runs for the second wicket, until Gandhi was out caught behind by Samson Sola for 20. In the 38th over, Hughes was finally out caught by Senthil Selvaratnam for 91 off 105 balls, a game-changing innings.

Selvaratnam bowled Jay Patel in the same over to put North City on 191-4. Cam Meads ran out Ruben Nithyaganesh in the 41st over for 15. Fraser McHale and Sam Millmow added 46 runs for the sixth wicket, until Millmow was out caught by Vivek Lala for 17.

McHale fell an over later, out caught off Harley Smith for 36 off 28 balls, a good death batting knock. Smith got another wicket in the last over, Matthew Blair caught behind, with North City finishing their 50 overs on 283-8, a great score.

North City’s defence started well when Drew MacDonald had Louis Worthington out caught behind in the third over. MacDonald picked up a second wicket when Adi Ogra was caught six wickets later, putting Collegians on 32-2.

45 was added for the third wicket, until Cam Meads was out caught by Samuel Millmow for 22. Stuart Veitch got the key wicket of Matthew Vercoe-Curtis in the 25th over, out caught for 37.

MacDonald and Gandhi combined for a run out four overs later, getting the dangerous Jordan McDermott out for 34 off 36 balls. The next over, Matthew Blair had Samson Sola out caught for 10, putting Collegians on 140-6.

Niko Brooky struck twice in the 35th over, Harley Smith and Euan McNaught both out caught, to put North City in control. Veitch picked up the last two wickets, Thapa out caught for 39 and Selvaratnam bowled, to give North City a comfortable 84 run victory.