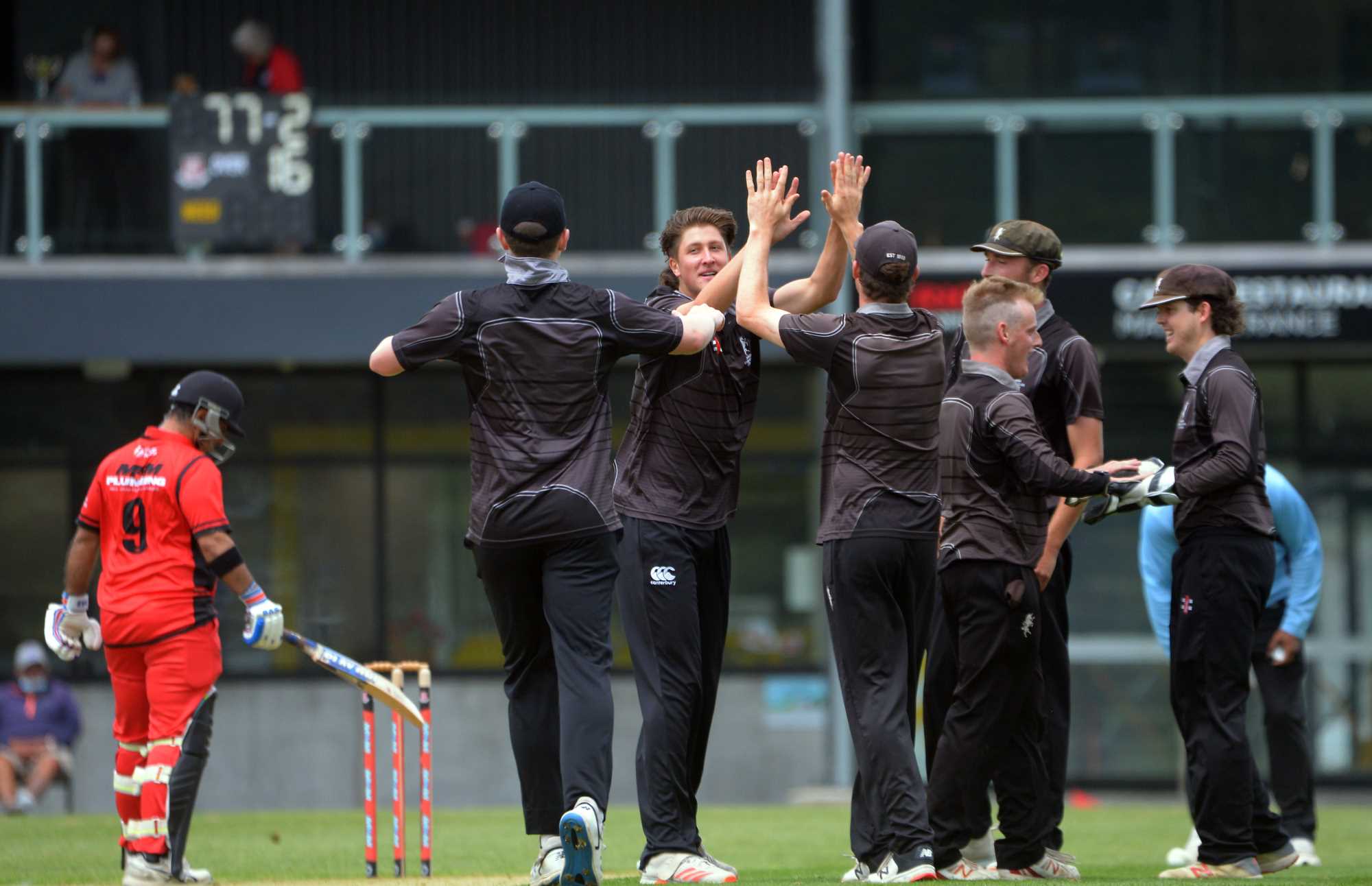 Eastern Suburbs won the toss and elected to bat, with Firebird Luke Georgeson returning to open the batting. He batted well, however was bowled by Daniel Rose in the twelfth over for 33.

83 runs was put on for the second wicket between Jed Wiggins and Lauchie Johns, until Johns was out caught in the 25th over off Joshua Dean’s bowling for 63 off 54 balls in an explosive knock. This put Easts 142-2 at the halfway point.

Firebird Jamie Gibson was out LBW by Onslow skipper Sean O’Connor for 18 in the 34th over. Then, Max Sargentina returned to pick up two quick wickets, Fraser Colson and Jimad Khan, both out caught.

In the 45th over, Matthew Scoble had Jed Wiggins out caught, in another classy innings from Wiggins, where he scored 70. At this point Eastern Suburbs were 233-6.

The final five overs saw Easts score well, with Jacob Logan and Dilakshan Sasikumar both scoring quick 20’s to push the side to 286-8. Matthew Scoble picked both of their wickets at the death, finishing on 3-76.

It was always going to be a tough chase for Onslow, which was made even harder when captain O’Connor was out caught in the second over from Jacob Madigan. Two overs later, Madigan had Rithwick Negi out caught as well, with Onslow 13-2 after four overs.

Luke Georgeson opened the bowling alongside Madigan and bowled well, with his efforts being rewarded in the fifth over when he had Nathan Robinson out caught.

Onslow needed to rebuild and an 82 run partnership between Firebird Tim Robinson and Micah Conroy swung the game on it’s head. In the 23rd over, Felix Murray broke the partnership by getting Conroy out stumped for 35.

Sam Keegan was bowled by Jacob Logan an over later and Logan Malthus was run out by Georgeson to put Onslow in a tough position at 130-6. With Robinson still in, it was still possible though, until Madigan had him caught behind for 73, a major wicket.

Sargentina was out caught in the 33rd over by Madigan, giving him his fourth wicket. Wiggins got Rose soon after caught as well, then Dean was also caught off Murray’s bowling, making Onslow 162 all out.

This is Eastern Suburb’s first win of the season, with Jacob Madigan’s 4-55 being a highlight.

Upper Hutt elected to bowl first and got the big wicket of Scott Mudgway in the sixth over when Nish Desai had him out caught for 22. Gareth Severin and Devan Vishvaka added 59 for the second wicket, until Vishvaka was out caught by Lahiru Sandeep’s bowling for 39.

Severin fell an over later, out LBW by Bhavik Patel for 27. Reece Edgecombe was out LBW off Thijs Turner, putting the score at 96-4.

Captain Raki Weerasundara was out caught by Tyler Simpson in the 39th over. Scott Edgecombe was also out caught surely after by Sandeep.

Josh Mann and Jeremy Benton scored 49 in a game-changing partnership, until Mann was run out by Desai for 38 off 24 balls. Benton finished on 33 not out to get Johnsonville to 204-7 after their 50 overs.

Johnsonville restricted Upper Hutt early on to just 22 after 12 overs, with Scott Edgecombe getting Thomas Jones out caught. Callum McLachlan and Shivang Choudhary put on 63 for the second wicket, with Connor Lusty getting McLachlan caught behind for 43.

Choudhary was out LBW by Benton three overs later for 33. The next ball, Lusty got the key wicket of Matt Taylor LBW, turning the game on it’s head at 98-4. Desai was also out LBW by Lusty in the 32nd over, with Lusty having a great spell of 3-31.

Max Petrie came back on and took the wicket of Navroz Singh out caught. Captain Weerasundara took two wickets in the same over, both out stumped, to have Upper Hutt in trouble at 128-8.

Petrie got Navroz Singh out caught the next over, with Johnsonville needing just one wicket for the victory. Weerasundara got it in the 38th over, getting Sandeep out caught to bowl Upper Hutt out for 135, in a great win for Johnsonville.

Gritty Ewen Chatfield Trophy match gets abandoned due to rain

Karori bowled first and got off to a great start when Jakob Vandenburg bowled Firebird Nick Greenwood in the sixth over. 53 runs were added for the second wicket, until Toby Barton was out caught behind by Alex O’Malley for 41.

Two balls later, Mitch Scott was also out caught behind but by Vandenburg for 21, making the score 77-3. 52 runs were added for the fourth wicket, then Deepak Joon was run out by Liam Roche for 26.

Roche had Firebird Logan Van Beek out caught behind in the 38th over, a big wicket. Brett Johnson scored a patient 34, but was out LBW by Daniel Pile. Michael Snedden and Jakob Bhula each picked up a wicket at the death to restrict Taita to 206-8 after 50 overs. Captain Nik Swain scored 48 not out in a classy innings.

Logan Van Beek got Taita off to a superb start when he bowled Jonny Fletcher in the first over. The game looked to be a tight one, however bad weather unfortunately led to the match being abandoned, with both teams sharing the points.

Collegians chose to bowl first and got off to a great start when Samson Sola got the big wicket of Sam Mycock out caught for 26 in the 12th over. Sola then bowled Caleb Montague out two overs later. Next ball, Sola bowled Jesse Tashkoff to put Hutt District in trouble at 43-3.

Chander Ravi and Will Stevenson gave the side the rebuild they needed, with a 132 run partnership for the fourth wicket. In the 39th over, Stevenson was bowled by Anubhav Thapa for 56, a great innings.

Firebird Troy Johnson had an explosive cameo of 23 off 16 balls until he was caught off Vivek Lala in the 45th over. Lala got Chander Ravi out two overs later after he had celebrated his clinical century. Ravi finished on 104 off 114 balls in a game-changing performance.

Lala bowled both Ben Skilton and Iain McPeake at the death to finish off on 4-24, in a great display of death bowling. Hutt District finished their 50 overs on 282-9, a great score yet again by this batting lineup.

A good start is what Collegians needed and that's what they got, with the side 47-0 after seven overs. However, Worthington was caught off Daniel Rae for 16. Rae picked up the wicket of Adi Ogra out LBW in the 14th over, to have Collegians 56-2.

Firebird Ben Sears was always going to be tough to handle, getting skipper Cam Meads out caught behind. Opener Matthew Vercoe-Curtis was still in the middle and looked dangerous, until Ben Skilton got him out caught for 43, in a strong innings.

Jordan McDermott was out caught two overs later by Jesse Tashkoff for 23 and Skilton got Sola LBW shortly after, putting Collegians at 109-6.

50 runs was added for the seventh wicket by Anubhav Thapa and Harley Smith, until Tashkoff got Thapa out caught for 27. Smith fell an over later, out caught by Baahul Gandhi for 24.

Tashkoff ran out Senthil Selvaratnam, with Hutt Districts needing just one wicket for victory. Gandhi got the wicket of Vivek Lala, out caught, to bowl out Collegians for 166. Another convincing victory for Hutt District, who are the team to beat in the competition.

North City’s choice to bowl first looked like the right call after Drew MacDonald bowled both openers, Ben Strang and Robbie Selbie, in the first five overs. It got even worse for the home team when Rhys Bayly was out caught by Matt Blair in the sixth over.

Blair bowled Isaac Snell in the eighth over to put Victoria University in a tough spot at 29-4. Captain Matt Fowler and Connor Jarden gave the side hope with their 52 run partnership for the fifth wicket, until Fowler was caught behind off Stuart Veitch for 21.

In the same over, Veitch had Jimmy Thompson out caught behind as well, putting Victoria University on 81-6 after 24 overs. Blair came back on to bowl and took the big wicket of Jarden out caught for 26.

MacDonald and Blair bowled brilliantly together again at the death to bowl out Victoria University for 111, with MacDonald taking 4-21 and Blair taking 4-35 in a great bowling partnership.

Victoria University needed early wickets and they got that when Sahir Hussain bowled Shaun Bishop in the seventh over for 20. An over later, Brett McBride got Russell Hughes out caught behind, putting North City under some pressure at 32-2.

Hussain took another quick wicket, Sheil Gandhi out caught and bowled in the ninth over. North City got through eight overs unscathed, however Victoria University were restricting their run scoring, until Ruben Nithyaganesh was out LBW by Ben Strang, with North City at 45-4.

Jay Patel and Fraser McHale steadied the chase and had a 33 run partnership for the fifth wicket, until the rain came through and stopped the match from being played.

Fortunately for North City, more than 20 overs had been bowled, making them the winners through Duckworth Lewis.

Naenae got off to a great start bowling first against rivals Petone when Ciaran Hargreaves had Wade Mckenzie caught in the first over. Two balls later, Ryan Jackson bowled Scott Jones in a perfect start for Naenae, with Petone 4-2.

In the tenth over, Shane Stratford was bowled by Scott Good, putting Naenae in control. The dangerous Nathan Sterling was bowled three overs later by Gurpreet Singh Panesar for 25.

Kieran Butler and Andrew Drummond had a 77 run partnership for the fifth wicket, shifting the game completely. In the 32nd over, Drummond was bowled by Campbell Webster for 31. Webster took the wicket of Jamie Fevre caught behind in the 38th over, putting Petone at 147-6.

Butler was out caught in the 43rd over, however the damage was already done, where he scored 79 off 89 balls to put Petone in the driver's seat. Ryan Jackson picked up two wickets at the death, including skipper Craig James bowled, who scored 17 off 11.

Petone finished the 50 overs at 225-9, in an impressive comeback considering their rough start.

Two overs were bowled in Naenae’s chase, where they scored 10 runs for no wicket, until the rain came in, leading to the match being abandoned. Both teams get two points each from it, a fair result.