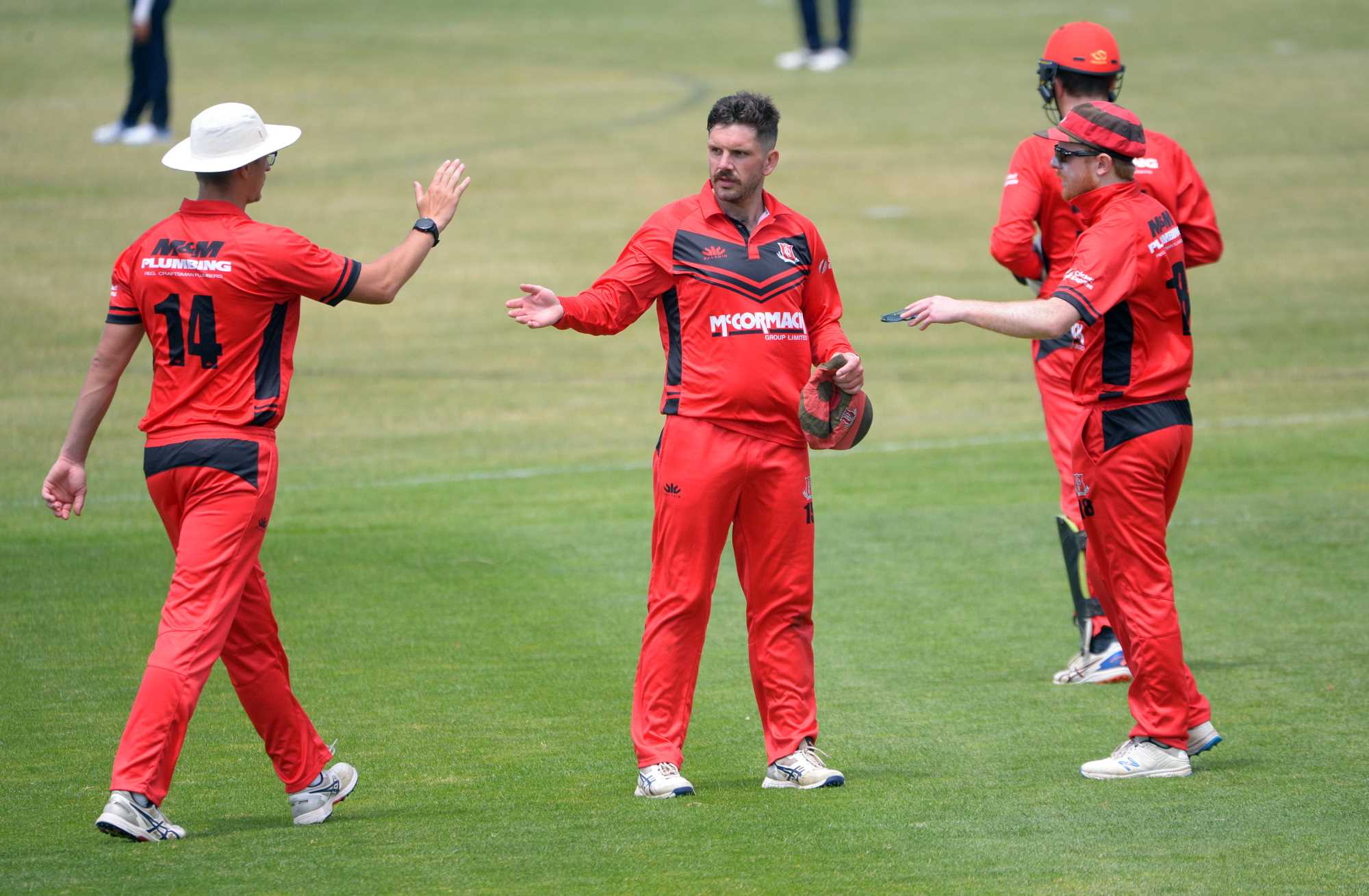 Winning the toss and choosing to bowl first, Taita got off to a great start, with Matt Kelly taking two wickets in the first six overs, including the dangerous Lauchie Johns, to put Easts at 25-2.

Kieran McComb and Meet Solanki combined for a run out in the 12th over to get Dilakshan Sasikumar out. An 81 run partnership from Jacob Logan and Jimad Khan allowed Easts to rebuild, until Logan was run out for 52.

Brett Johnson shifted the game completely with his spell, where he bowled two players and had another three out LBW, to take five wickets of the middle and lower order. He was superb, finishing on 5/38 off 10 overs in a game-changing spell.

Easterrn Suburbs were bowled out for 174, after Jono Tuffin had Jed Wiggins out caught for 24. Momentum changed throughout the innings and it was going in Taita’s favour heading into the second innings.

The dangerous Toby Barton was out early, caught behind off the bowling of Jacob Madigan to have Taita at 9-1.

Eastern Suburbs then relied on their spin bowling attack, with Felix Murray, Jacob Logan and Jed Wiggins all taking a wicket each, including the wicket of Mitch Scott, who finished on 58, to have Taita at 127-4.

Wiggins made it interesting, taking four wickets of the middle order, two stumped and two caught, to finish on 5/41. This meant that Taita needed 18 runs with two wickets in hand.

Matt Kelly and Pat Smith got the team home, with Kelly finishing on 18 off 14 not out to win the game for Taita. It was a game where spin dominated, including two five wicket bags from Brett Johnson and Jed Wiggins.

Onslow decided to bat first in this clash, however were definitely regretting this decision early on, as Max Petire and Zac Ringrose combined brilliantly, taking two wickets each, to put Onslow at 24-4.

Micah Conroy and Logan Malthus rebuilt the side, having a gritty 46 run partnership, until Malthus was out caught off Scott Edgecombe’s bowling for 17. Conroy fell slightly after, getting run out by Ringrose for 36.

Edgecombe and Ringrose took a wicket each off the lower order to have Onslow 89-8. Matt Scoble batted well at the end, scoring 17 off 27 balls, to get the side to a respectable total.

They were bowled out for 113, knowing they would have to bowl and field at their best to beat Johnsonville.

Daniel Rose and Matt Scoble were brilliant as an opening pair in this innings. First Scoble had the dangerous Devan Vishvaka out caught behind, then Rose got Scott Mudgway out caught, to have Johnsonville at 42-2.

Rose bowled Gareth Severin the ball after Mudgway fell, putting Johnsonville under pressure. He then caught and bowled Reece Edgecombe a couple of overs later, then Scoble got skipper Raki Weerasundera out caught. Scott Edgecombe was out caught off Rose’s bowling, to put Johnsonville at 57-6.

Jeremy Benton and Josh Mann kept their cool and scored a 59 run partnership to get Johnsonville home in a four wicket win. It could have gone either way, but the pair batted well in tough circumstances to finish the job.

Mann finished on 47 off 48 not out in an impressive display of batting. Rose took 4/34 and made his side believe in the upset, however it wasn’t meant to be for Onslow.

Karori won the toss and elected to bat and got off to a tough start when Andrew Fletcher was out caught in the fifth over off Tyler Simpson’s bowling. Clark Murray and Jakob Bhula then had a 45 run partnership until Murray was caught behind, to put Karori at 49-2.

Bhula and Sam French had a great partnership of 87, but Bhula was caught off Simpson’s bowling for 57. French fell shortly after in the 44th over, getting caught off Bhavik Patel’s bowling for 63, with Karori on 179-4.

Shivang Choudhary bowled well at the death, taking two wickets. Bhavik Patel then got a run out to keep Karori to 220-7 after 50 overs, with Liam Roche scoring 24 off 25 at the end.

Upper Hutt got off to a brilliant start, with Callum McLachlan and Thomas Jones scoring an opening partnership of 80. Jones was caught from Bhula’s bowling for 35 in the 22nd over. McLachlan fell three balls later, getting stumped off Daniel Pile for 41, with the score at 80-2.

Bhula featured again, getting Choudhary out caught for seven. The partnership of Matt Taylor and Nish Desai looked dangerous, however Alex O’Malley bowled both of them in two consecutive balls to put Upper Hutt at 124-5.

Navroz Singh was bowled by Liam Roche three balls later, then Pile bowled Bhavik Patel to have Upper Hutt in trouble at 136-7. James Hartshorn picked up two wickets at the death, with Karori needing just one wicket to win.

Charlie Wilson batted well at the end, scoring 26, however was the last wicket, out caught by Bhula. Karori won by 53 runs, in a great team bowling and fielding performance to defend 220.

Hutt District won the toss and elected to bat first, where they started well, until Caleb Montague was bowled by Brett McBride in the 12th over. Ben Strang had skipper Chander Ravi out caught shortly after, putting Hutt District at 64-2.

Tom Valentine was impressive with the ball, striking twice in quick succession, getting Jesse Tashkoff out LBW and Will Stevenson caught in the space of three overs.

Opener Sam Mycock and Campbell Mackie got a 48 run partnership, until Sahir Hussain had Mackie out caught.

Jimmy Thompson got two players out LBW in two balls to bring Victoria University back in the game. Toby Jeffrey picked up two wickets at the death, with Hutt District finishing on 245/9.

Opener Sam Mycock carried his bat, scoring 126 off 136 balls, in his second century of the season. He was clinical with the bat in this match, getting his side to a great total.

Chander Ravi got the first wicket of the second innings in the 11th over, when he bowled Isaac Snell. Explosive opener Ben Strang continued his great form this season, scoring 62 off 58, laying the platform for Victoria University.

A 60 run partnership between Rhys Bayly and Matt Fowler gave the side a great chance of upsetting Hutt District, until Bayly was out caught by Baahul Gandhi for 37. Fowler followed shortly after, out LBW to Ravi for 38.

The very next ball Ravi had Jeffery out stumped for a golden duck, switching the momentum Hutt Districts way. Wickets kept falling, with two run outs and a wicket each for Ravi and Chris Walker, allowing Hutt District to slow down Victoria University, in a 39 run victory.

Naenae got off to a great start, with Gurpreet Singh Panesar getting Matthew Vercoe-Curtis out caught in the second over. Louis Worthington and Adi Ogra steadied the ship in a 52 run partnership, until Worthington was out caught off Rogan Vekony’s bowling for 38.

Vekony then had Ogra out caught two overs later, putting Collegians at 59-3. He got Scott Oldham out caught as well, in a game-changing spell of 3/18.

The dangerous Cam Meads was bowled in the 22nd over by Scott Good, with Naenae in control. However, a 77 run partnership between Anubhav Thapa and Samson Sola shifted momentum back in Collegians’ favour. Campbell Webster got Sola out caught for 37, with the score at 166-6.

Good bowled Thapa for 46, bringing in the tail. Two run outs and a bowled by Ciaran Hargreaves allowed Naenae to bowl Collegians out for 191.

Vivek Lala’s opening spell was incredible and made it hard for Naenae to chase. He took 4/24 in a match-winning spell for Collegians, where he had two batters out bowled and two out caught behind, making Naenae 33-4 after 14 overs.

Adi Ogra then bowled two batters in two balls to make the score 43-6. Opening batter Panesar and Ryan Jackson didn’t give up, making a 46 run partnership, until Panesar was bowled by Ogra for 50.

Thapa and Sola both took a wicket each to have Naenae needing 70 runs to win with one wicket remaining. Ryan Jackson and Scott Good looked likely in doing just that, until Jackson was bowled by Cam Meads for 61, giving Collegians the win by 12 runs.

Petone’s decision to bowl first looked like the right choice after Craig James had both openers out, one bowled and one LBW.  Kieran Butler and Liam McGee each took a wicket in the middle overs, putting North City at 85-4 after 25 overs.

Calem Taylor then took two wickets, including Fraser McHale bowled for 22. Scott Jones was impressive with the ball at the death, taking 2/22.

Skipper Samuel Millmow finished on 68 off 78 not out, getting his side to a competitive total of 206/8.

Petone got off to a really fast start. Wade Mckenzie was bowled by Matthew Blair then Scott Jones was out LBW by Blair for 26 off 16 balls, with Petone on 52-2 after 7 overs.

Shane Stratford and Nathan Sterling put on a 55 run partnership, until Stratford was bowled by Stuart Veitch for 39. Veitch got two quick wickets, Kieran Butler out caught and bowled, as well as Rory Woolett out bowled, turning the game on its head with Petone on 115-5.

Jamie Fevre was out caught behind by Veitch as well, giving Veitch the incredible figures of 4/25 off 10 overs in a game changing spell.

Unfortunately for North City, wicketkeeper Nathan Sterling continued to bat well. He finished on 73 not out, guiding his side to a major four wicket win, in a match-winning knock. Calem Taylor finished on 24* as well, in a clutch partnership.